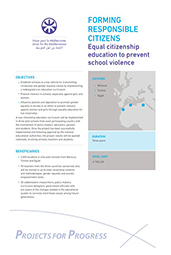 Launched in 2015, the project “Forming Responsible Citizens”, promoted by the Spanish organisation Ideaborn aims to contribute to strengthening the civic values of young people and promoting the role of schools and civic education as main vehicle for preventing violence and transmitting values of tolerance and equality between women and men.
The project is currently implemented in Jordan, Lebanon, Morocco and Tunisia with the financial support of governments of Norway and Monaco.

The project is structured in three components:

The project is promoted by Ideaborn, an organisation based in Spain, in cooperation with local non-governmental organisations from Jordan, Lebanon, Morocco and Tunisia. It is implemented in partnership with national education authorities from the participating countries.

The selected local partners have all established successful cooperation with national educational authorities in their respective countries by conducting joint projects in the field of education. These local partners are: