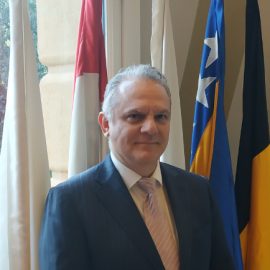 Director of the Legal and Administration Department

Evagoras Vryonides is a citizen of the Republic of Cyprus. He holds an MBA Degree in Management from the Fairleigh Dickinson University of the United States.

Prior to his appointment at the UfM Secretariat by the Government of the Republic of Cyprus, he was the Head of the Schengen Department at the Ministry of Foreign Affairs, handling the dossier of the Multiannual Financial Framework of the European Union. He was also responsible for Visa Policy issues and for bilateral agreements of consular cooperation.