Back together: UfM takes part in the 4th edition of the World Youth Forum

Sharm el Cheikh, 10-13 January 2022 – The Secretary General of the Union for the Mediterranean, Nasser Kamel, participated at the 4th edition of the World Youth Forum (WYF) held in Sharm el Cheikh under the auspices of Egyptian President Abdelfattah El Sisi. This year’s edition was titled “Back together” and discussed Post-COVID effects, climate change, and human rights among other topics. The World Youth Forum is a platform built by promising youth engaging young people from around the world and allowing them to exchange views and recommend initiatives to decision-makers and influential figures. It is a chance for youth to engage with top policymakers, network with promising youth from the region and the world that are determined to make our world a better place.

The Secretary General intervened in a panel dedicated to the role of international institutions in boosting the recovery. He detailed the efforts the Union for the Mediterranean has undergone over the past two years in assisting member states to better deal with the effects of the pandemic, especially through the UfM Grant Scheme for Employment Promotion, launched with the support of the GIZ on behalf of the German Ministry for Economic Cooperation and Development. He also mentioned the UfM’s work in promoting e-governance as a way of coping with the pandemic, and its efforts to help MSMEs in the region.

In a meeting the Egyptian President held with international and regional development partners, the Secretary General discussed the challenges in achieving the SDGs that witnessed the first ever reversal in progress since its adoption in 2015. He stressed on the huge opportunities available in the Euro-Mediterranean region to help achieve a sustainable and shared growth, focusing on renewable energy and women empowerment. 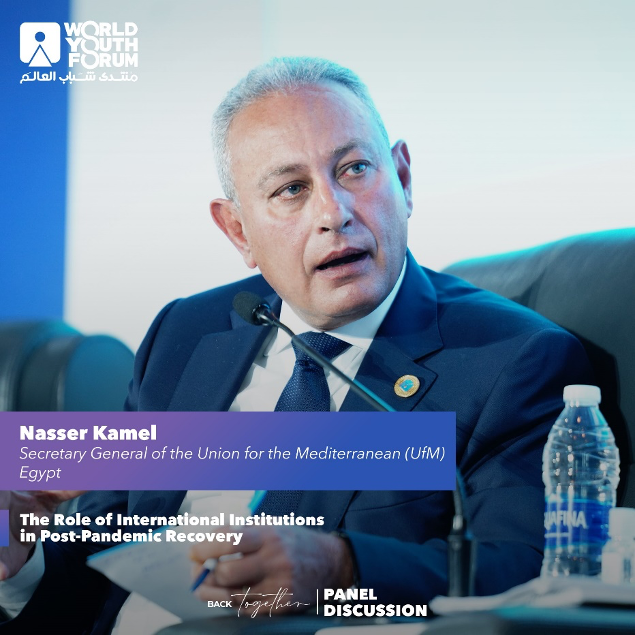