Barcelona, 5 July 2019. Social Economy represents more than 3,2 million enterprises and organisations and 15 million jobs in the Euro-Mediterranean region. Firmly believing that it can further unlock resources whilst creating sustainable employment, the UfM organized its first event fully dedicated to social economy at its premises in Barcelona, on 5 July 2019. Acting upon the UfM Ministerial mandates and in line with the UfM Roadmap, the Workshop on Social Economy in the MENA Region and the Balkans focused on two interrelated thematics, namely Entrepreneurship and Job Creation in Social Economy and Social Innovation for a positive Socio-Economic Impact.

The Workshop was co-organized by the UfM, the Deutsche Gesellschaft für Internationale Zusammenarbeit (GIZ) GmbH commissioned by the German Federal Ministry for Economic Cooperation and Development (BMZ), and the Spanish Confederation of Social Economy Enterprises (CEPES), with the support of Social Economy Europe (SEE) and the ESMED Network. It brought together multiple stakeholders from both shores of the Mediterranean to exchange views and experiences, share best practices and lessons learned, and present recommendations on how to best unleash the full potential of Social Economy in the Region.

From his side, the President of CEPES and Social Economy Europe and the General Coordinator of the ESMED Network, Mr. Juan Antonio Pedreño, welcomed this collaboration framework with the UfM that “strengths the Euromed and international dimension of the Social Economy, an enterprise model that accounts for 7% of the world GDP, according to the United Nations ».

In her welcome address, Acting Secretary of State for Employment, Spanish Ministry of Labour, Migrations & Social Security, Yolanda Valdeolivas, welcomed the growing presence of Social Economy in multilateral cooperation frameworks. The State Secretary to the Minister for Tourism, Air Transport, Craft and Social Economy; Responsible for Crafts and Social Economy, Morocco, Jamila El Mossalli, stressed the need for advocates that would promote the cause of Social Economy given its clear contribution to sustainable and inclusive human development. 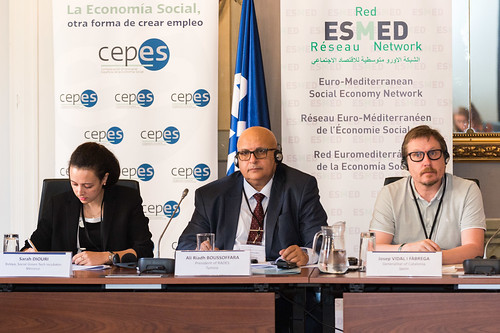