Barcelona, 29 September 2022. The Conference on “Sustainable Urbanisation through Port City Transformation” was held in Barcelona on 28 and 29 September 2022, and it provided a unique opportunity for representatives of Mediterranean ports and adjacent cities, government representatives, and other key regional and international stakeholders to discuss sustainable urbanisation through port city transformation.

The Conference underlined, once more, the importance of stronger dialogue and working relationship between ports and port cities as well as with governments and other stakeholders in general with a view to realizing urban development visions in port cities. The UfM, in the upcoming period, intends to contribute to strengthening this dialogue and working relationship within its mandate, and also to work closely with the co-organizers. The UfM’s contribution may eventually lead to identification and implementation of urban regeneration projects and improvement of related legislation in the region.

The Conference launched a process of annual gatherings of Ports and Port Cities, which will take up different aspects of the Ports and Port City relationship, as agreed in the UfM Regional Platform on Sustainable Urban Development. This work is guided by the UfM Strategic Urban Development Action Plan 2040 and it will contribute to the implementation of its principles and actions.

Visit to the Barcelona Port

On 28 September, the co-host of the Conference, the Port of Barcelona, organised a visit to the Port where Jordi Torrent, Head of Strategy, presented in detail the evolution of the integration between the port and the city from 1956 to 2040, indicating how the industry was moved south of the city centre, the project of the old port, the new port mouth and key actions undertaken to reduce the port’s environmental footprint. He noted that at present, the port is in its third transformation phase and in the process to become a hub for innovation, blue economy and for training related to nautical activities.

On the same day, the other co-host of the event, the Barcelona City Council, hosted a welcome reception whereby Barbara Pons, Commissioner for Agenda2030, Barcelona City Council and Sabri Ergen, UfM Deputy Secretary General for Transport and Urban Development addressed the participants. Commissioner Pons explained how Barcelona’s Agenda2030 represents a road map for the city’s public policies in the coming years and can serve as a guide and a driver for all stakeholders to contribute together to achieve the SDGs in Barcelona.

UfM Deputy Secretary General Ergen welcomed all participants to the Conference and thanked UfM partners for their contribution to its organisation. He highlighted that besides the obvious and intrinsic part related to transport and logistics, ports have also an urban dimension.

During his opening address, UfM Secretary General Nasser Kamel, stressed the essential contribution of port cities to the Mediterranean economy and civilisation throughout history. He noted that the Conference intended to take up some of the challenges posed by ports and the externalities they generate on their territories, and to contribute to the dialogue with a view to finding solutions and a balance between economic development and its impacts. He concluded by recalling that the Conference will be an important milestone in the run-up to the Ministerial Conference on Sustainable Urban Development to be held in Zadar, Croatia in May 2023.

In present times, ports generate externalities on their territories that pose a challenge in finding the perfect balance between economic development and its impacts. Living, working, producing, and recreating at the edge of land and water and amidst strong sectoral interests of ports and cities generate particular and sometimes conflicting spatial interests and challenges of stakeholder collaboration.

Authorities of ports and adjacent cities have been striving to establish a new working relationship. In this respect, urban regeneration projects located at the boundary between the port and the city have become a defining part of this evolving collaborative relationship, and there is a need to develop shared visions to develop urban regeneration projects. 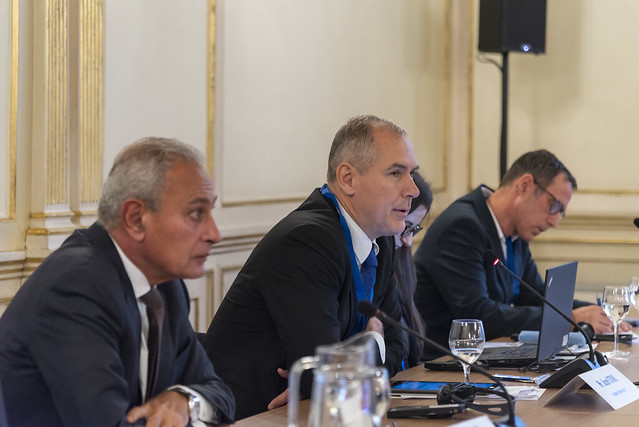