“Mediterranean of the Future”: UfM Secretary General participates in the conference on youth in Marseille

Marseille, 12- 13 November 2018. The Secretary General of the UfM, Nasser Kamel, participated on November 12 and 13 2018, in the Conference “Mediterrranée du futur”, held in Marseille at the Mediterranean Villa, whose theme was: priority to youth and innovation. During this conference, the SG made an official speech during the closing session, alongside the French Minister of Europe and Foreign Affairs, Jean-Yves Le Drian and the President of the French Region Provence-Alpes-Côte d’Azur, Renaud Muselier.

The French Minister, on this occasion, presented the French initiative “Sommet des Deux Rives”, announced its organization in Marseille and exposed the main lines relating to the organization of this event.

Highlighting the important role the UfM plays in this process, Le Drian defined the UfM as a “major partner” in the organization of this “big event”.  On the other hand, the SG confirmed the UfM’s willingness to support the French project.

During the opening session, the UfM’s SG also made a speech, along with the President of the Provence-Alpes-Côte d’Azur Region, Renaud Muselier, the President of the Anna Lindh Foundation, Elisabeth Guigou and the Interministerial Delegate Ambassador to the Mediterranean, Pierre Duquesne.  He expressed his joy at being present in Marseille, “Mediterranean capital par excellence”, which offered him the opportunity to reiterate the UfM’s commitment towards youth, a key sector in the UfM action and activities and to reiterate its support for the success of the “Sommet des Deux Rives”, launched by President Emmanuel Macron, which will allow the UfM to reaffirm its place in the Mediterranean project.

On this occasion, UfM’s SG had a meeting with the President of the Provence-Alpes-Côte d’Azur Region, Mr. Renaud Muselier, with whom he exchanged on several points of interest, notably the organization of the Summit of the Two Rives on June 24, 2019 in Marseille, reaffirming the UfM’s willingness to participate in the preparations for this Summit and to establish the modalities of UfM cooperation in organizing this event.

On the sidelines of this Conference, the SG signed with the Center for Integration in the Mediterranean a Memorandum of Understanding on November 12, 2018, at the Hotel de Région. 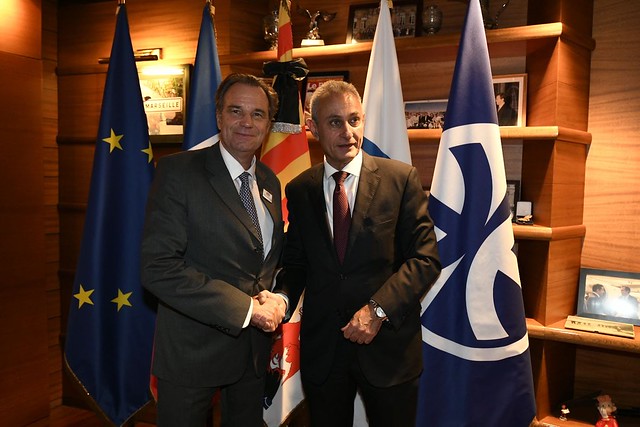 Creative Forum 2021: Cultural and Creative Sectors as Agents of Change
UfM-Emuni Webinar: Women in blue economy in the Mediterranean
للمزيد