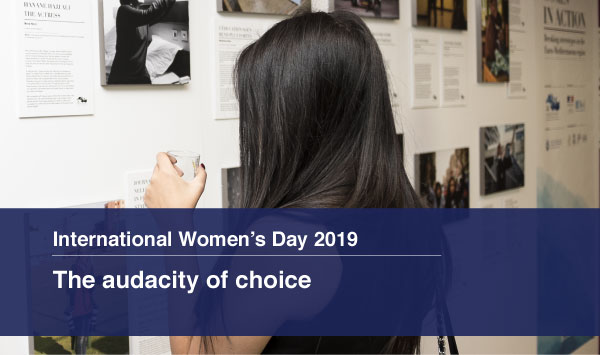 Event “The Audacity of Choice”

International Women’s Day is an opportunity to take stock of the progress made on gender equality and the situation of women, but above all, to anticipate the future and enhance the opportunities that will benefit future generations of women and men.

This year, in partnership with the French Institute of Barcelona and the InterArts Foundation, the UfM has chosen to shed light on those women of the Euro-Mediterranean region who have had the audacity, in order to appropriate their the right to equality, to choose singular pathways that upset common prejudices and stereotypes about women and their roles in society. An open event at 19:00 pm at the French Institute of Barcelona will celebrate five women from the Euro-Mediterranean region who – by their audacious choices – have paved the way of equality, so other women and girls can benefit from it.

“Audacity will make us free”
Linda Bortoletto began her career as an Air Force Officer. She aspires to become an army pilot, but her dream came to a stop due to a medical problem. Yet, she joined the National police where she commanded for over 4 years more than 150 policemen. At 27, she was promoted to captain. She was then seconded as a senior official at the Ministry of Finance, in charge of implementing the reforms of the State.

Three years later, at age 30, she felt the urgency to live life when her father past away, so she put an end to her career in the police in order to builds projects that resemble her. This is how “beyond any frontier”, exploring the world, others and herself started. She sets off on a solo expedition to meet nomadic people from Kamchatka on the far east of Siberia; for several months, she follows the transhumance of reindeer ; she then crosses Alaska by bike, lives a year with Buddhist nuns in the depths of the Himalayas, runs through Kyrgyzstan, biking in eastern Tibet, and recently explores the Middle East by foot! These expeditions have become a real inner quest, existential and spiritual.

“First be free, then ask for freedom”
Graduated from political science and communication, Sonia Terrab is the author of two novels, Shamablanca (2011) and The Revolution did not take place (2015). As a journalist, she worked for Tel Quel Magazine and collaborated with Afrique Magazine, the Jeune Afrique monthly in Paris. For three years now, she has been a screenwriter with already three TV movies to her credit for Moroccan television. Shakespeare in Casablanca is her first film as a director. Sonia Terrab is preparing her second documentary and has just created a web series, Marokkiat (Moroccan), which gives the floor to women in the public space to tell their faces, discovering many taboos in Moroccan society ; this is part of the Jawjab digital audio-visual program, of which she is the godmother, and which is dedicated to freeing women’s speech in Morocco and the Arab world.

“The obstacles start with the toys the parents take home: Lego for boys and dolls for girls.”
Winner of the 2nd best mobile start-up worldwide in MWC 2016, Samira Negm – a Computer & Systems Engineering Graduate – played diverse roles during her 8-year experience in software industry between Cairo & Germany, ranging from software development, training, process design & optimization, project management & team leadership roles. After being awarded Valeo international efficiency award, Samira later decided to use the diverse knowledge she gained to solve real problems faced by her own community, specifically the congestion that resulted in wasting 5 hours daily commuting to work and back home. Samira decided to switch to social entrepreneurship to start Raye7, a culturally sensitive carpooling app that was the 1st to tackle cultural challenges in the region preventing people from utilizing their resources to have an efficient, safe and affordable commute. Raye7 is now providing its services in Egypt & Finland and further expanding with the help of GSMA Ecosystem Accelerator.

Speaker 4: Mihaela Ganea (Roumanie), Artistic Director of festival EuRocultura
Graduate of the Bucharest Conservatory, in piano from the class of Professor Dan Grigore, Mihaela Ganea went on to have a remarkable professional artistic career in the field of cultural management. She has work in several countries from Venezuela, South Africa, New Zealand to Belgium. Wherever she lived, apart from her professional activity, she promoted the Romanian culture relentlessly. In Belgium, after the creation of the direction of European artists, she became known to all Romanians and Romanian artists through the events, tournaments and festivals that she organized and promoted like: Festival Eurocultura, Gala Romanian theatre, collaborations with Queen Elisabeth Music Chapel. In recognition of her commitment to the dissemination and preservation of Romanian culture abroad, in 2018, the year of the Centenary of the Romanian State, Mrs. Ganea was named one of the 100 Romanian personalities who helped to promote the Romanian culture in the world.

After studying cinema in Paris, Khedija Lemkecher starts a career as an assistant director with several foreign and Tunisian directors such as Georges Lucas, Cédric Klapish, Rachid Bouchareb, Nouri Bouzid, etc … After a career as a director of films, she founded an audio-visual production company CERCINA FILMS PRODUCTIONS and became the youngest producer of feature film in Tunisia with the production of the film “Bab El fella – Cinémonde”. An activist for the cause of women and the image of women in film, she joined the International Association of Women in Radio and Television (IAWRT) and was called to CSW at the UN to present her plea. The latest films by Khedija Lemkecher “The Night of the Blind Moon” and “Bolbol” have been selected in several international festivals and rewarded. Through her films, she evokes those women who are hidden and do not want to show. In preparation for her film “The sirens hide to sing”, the director works on two other projects concerning individual freedoms in Tunisia.

“When we ask women directors or producers if gender inequality is an issue in their countries, they usually say there is no problem, only when they look at the numbers they do realise it really is a problem.” Source: EWA

Trained lawyer and chartered accountant, Isabel Castro Martinez began her career as a teacher in the Ivory Coast and then in Italy. She joined the Council of Europe in 1997, firstly working in the Financial Control Department, then became Deputy Director of Internal Audit in 2001. In 2006, she joined Eurimages as Deputy Executive Director. In this role, she was, in particular, responsible for the administrative and financial management of the Fund, as well as the distribution and exhibition support programs. She had also been running the Eurimages “Gender Equality” study group. In this role, she had overseen the implementation of a gender data collection system, had organised analyses and published studies by the Fund, as well as drafting the Eurimages gender equality strategy for the European film industry. Since leaving Eurimages at the beginning of 2017, Ms Castro has been actively working as a consultant and expert for cinematographic international co-production financing. Ms Castro is a bureau member of the European Women’s Audiovisual Network (EWA Network).

Moderator: Paule Celma, President of the Barcelona Chamber of Commerce

Paule Celma’s professional career has moved between France and Spain. Encounters and opportunities have led her from the Maghreb to Paris, then from Paris to Barcelona. After a degree in pharmacy and Iberian studies, she moved to Barcelona at the age of 22. She specialized in zinc, which she helped to implement in Spain. Paule Celma started to climb the ladder while starting a family, and became the manager of VMZinc for the Southern Europe and West Asia regions. At the same time, she joined the Board of Directors of the French Chamber of Commerce in Barcelona and became its first woman president in July 2018. She hopes that her success will inspire other women to take similar paths and still aspire to a world of more egalitarian work.

The UfM Secretary General signed the Memorandum of Understanding “No Women No Panel”, an initiative by the European Commission and RAI
Back together: UfM takes part in the 4th edition of the World Youth Forum
للمزيد

Plastic Busters CAP project kick-off meeting and press conference: Combating marine litter in the Mediterranean through an integrated and strategic management approach
Higher Education and Vocational Training as tools for employability: Which strategies for the UfM region?
للمزيد