In 2020, the UfM launched the first-ever Intergovernmental Monitoring Mechanism on Gender Equality in one of the Senior Official Meetings of the UfM Member States. This ongoing reporting exercise will allow measuring and reporting of the progress made on women’s rights and provide policy recommendations to close the gender gap in the region.

• Within the Euro-Mediterranean region, gender parity in Western Europe is estimated at 76.7% (54 years to achieve gender parity) and in MENA region at 61.2% (140 years), according to the Global Gender Gap Report 2020.

• Achieving gender equality for the current generation of working-age women in MENA could add as much as USD 3.1 trillion to regional wealth, according to the World Bank.

Member States agreed to establish a follow-up mechanism backed up with indicators to monitor progress, evaluate the gender gap and provide data for scientific-based policy recommendations to decision-makers, in order to monitor women’s quality of life and role in society. This supports the implementation of gender-related Sustainable Development Goals to ultimately tap into the full potential of women in the Euro-Mediterranean region.

The lack of gender-specific data can hide a lot of inequalities: the progress report will allow monitoring of the progress achieved at country level in terms of gender equality, and at the same time the formulation of concrete recommendations to build gender-based policies at country and regional level.

After extensive consultation with Member States, a set of 20 indicators across 4 priority areas were agreed.

6 of these indicators were selected for the first initial assessment, based as much as possible on the availability of a minimum of data and statistics, generally through the existence of global databases: UN Women, World Bank, ILO Stats, EIGE Stats, OECD Gender Stats, Eurostats, MEDSTAT, the Global Entrepreneurship Monitor, the global Database Doing Business, Global database on violence against women (UN Women) and national surveys and statistics. 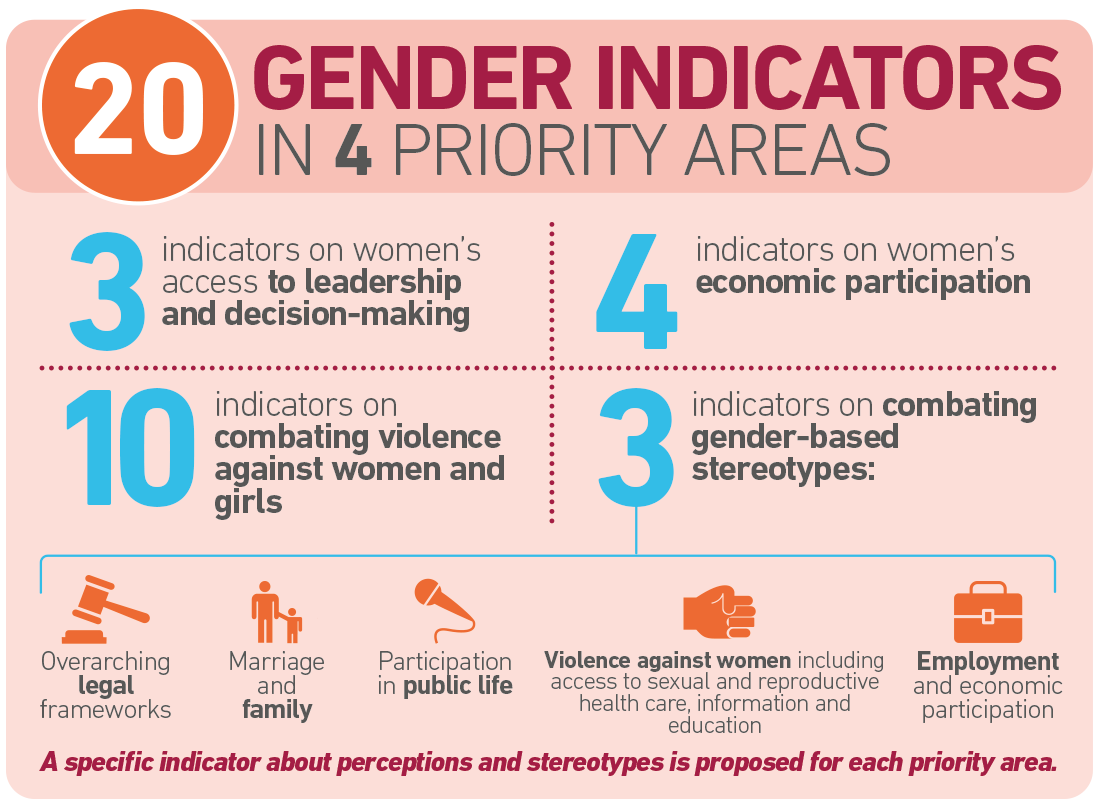 “We must build new inclusive societies that ensure young girls and women can fulfil their potential as agents of change and contributors to the region’s socio-economic development. This follow-up mechanism will offer an effective means to monitor the progress made on women’s rights and to work collectively to accelerate women’s full participation in the region.” – Nasser Kamel, UfM Secretary General.

The UfM is coordinating with Member States as they cooperate with National Statistic Offices and regional and national stakeholders to build a country progress report that will provide both qualitative and quantitative data on the 6 indicators and the associated sub-indicators. The UfM will be in charge of drafting the regional progress report, expected by the end of 2021, that will help to build the next Ministerial Declaration in 2022.

In the 4th Ministerial Conference on Strengthening the Role of Women in Society, held on 27 November 2017 in Cairo, UfM Member States adopted a strong Ministerial Declaration based on the UfM Regional Dialogue recommendations.

The Declaration constitutes an ambitious roadmap towards achieving gender equality and women’s empowerment in the Euro-Mediterranean region.  The Member States committed to promoting women’s equal participation in four priority areas:

Combatting all forms of violence against women and girls

During the UfM Regional Dialogue meeting on Women’s Empowerment held in Lisbon on 9 October 2018, the UfM Secretariat was mandated to propose, for validation by Member States, a set of indicators within the 4 priority areas, in addition to a proposal of tools to be used in monitoring and reporting.

Following consultation with Member States, these indicators were presented and discussed during the UfM Regional Dialogue meeting that took place in Barcelona in July 2019. They were endorsed on 30 July 2020, and then discussed at the UfM Regional Dialogue Meeting on Women’s Empowerment in November 2020, within the framework of the UfM High-Level Conference “Accelerating Gender Equality in the context of the COVID-19 pandemic.” This meeting also launched the preparation of the first monitoring and reporting exercise on the implementation of the six selected priority indicators by the UfM countries.

A Working Group was launched in March 2021 to coordinate data gathering, analysis and subsequent policy recommendations. Experts participating in the working group agreed on the need to coordinate and capitalize on the region’s good practices on women empowerment, and to take on board the impact of COVID-19, showing the strong regional commitment to gathering gender-disaggregated data to inform a resilient pandemic recovery and future action for the region. 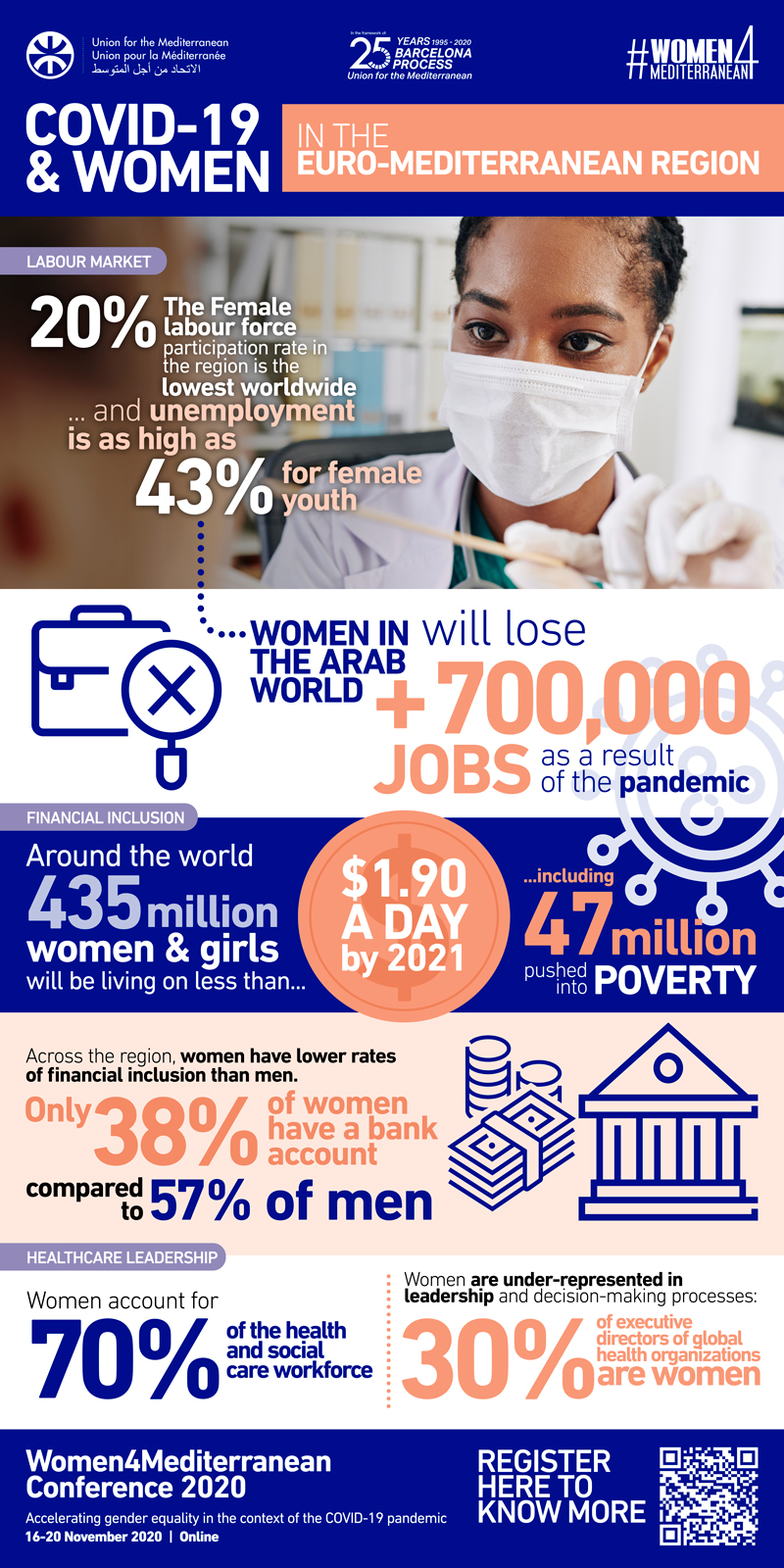 Download the Validated Indicators for the Establishment of the UfM Ministerial Follow-up Mechanism on Strengthening the Role of Women in Society, available in English, French and Arabic.

Infographic on the Intergovernmental Monitoring Mechanism

Organised by the department of Social & Civil Affairs