A delegation from the UfM Secretariat visits Sweden

A delegation headed by the Secretary General of the UfM, Mr. Fathallah Sijilmassi, and included the Deputy Secretary General for Social Affairs Mrs. Delphine Borione and the Political Advisor Mr. Alaa Youssef, paid an official visit to Stockholm on 8-9 October 2013, where they were received by the Swedish State Secretary for Foreign Affairs, H.E. Mr. Frank Belfrage, who reiterated his country’s continuous support to the activities of the Secretariat. The Swedish State Secretary expressed appreciation for the progress achieved and commended the Secretariat for its comprehensive and substantial approach focusing on developing concrete projects and strengthening regional cooperation, as well as working in synergy with other regional institutions, namely the Council of the Baltic Sea States (CBSS).

The delegation also met the Speaker of the Swedish Parliament, H.E. Mr. Per Westerberg, and the Minister for Gender Equality, H.E. Mrs. Maria Arnholm as well as representatives of the Swedish business community and civil society.

During the official visit to Stockholm, the UfM Secretary General Mr. Fathallah Sijilmassi held a meeting with the Director General of the Council of the Baltic Sea States (CBSS), Mr. Jan Lundin, in the presence of his deputies and heads of divisions, to explore possible areas for cooperation and synergies between CBSS and UfM. It was agreed to continue the discussions between the various divisions of the two secretariats to identify common projects and initiatives which could be of interest to both regions, especially that the two secretariats have many aspects in common.

A MoU was signed by the two Secretary Generals to lay the ground for developing cooperation between the two secretariats in terms of exchange of information and consultation, organizing events in areas of common interest, etc.

A public event was organized at the premises of CBSS and was attended by representatives of the Diplomatic Corps in Stockholm, academia and Press. The UfM Secretary General made a comprehensive presentation of the Secretariat’s objectives and structure, as well as the projects and initiatives which are currently being developed. 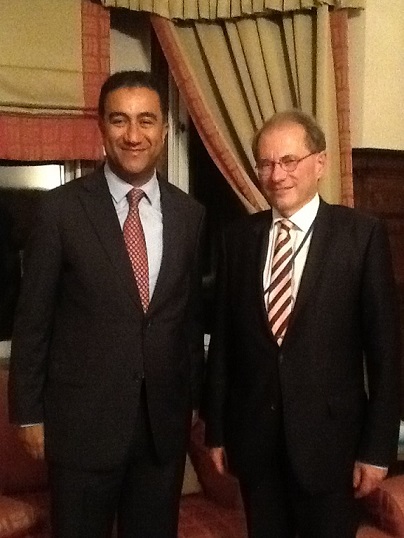