Climate emergency: Local and regional leaders call to establish a green deal for the Mediterranean

Barcelona, 23 January 2020. The 11th Plenary Session of the Euro-Mediterranean Regional and Local Assembly (ARLEM) gathered over 100 representatives of local and regional authorities at the UfM headquarters in Barcelona with climate action at the centre of the debates.

UfM Secretary General, Nasser Kamel, welcomed participants to the UfM headquarters and recalled the launching, 25 years ago, of the Euro-Mediterranean Partnership, which laid the foundations for the creation of the UfM. At this regard, the Secretary General highlighted the role of ARLEM – the territorial dimension of the UfM – as an essential partner in the fight against climate change: “We are facing a Climate Emergency across the Mediterranean today.  ‎And it’s easy to understand that local and regional authorities ‎are at the forefront when addressing ‎the effects of climate change. ‎Cities and regions are the ‎first line of defense. ‎The success of effective measures to ‎mitigate and adapt to the negative ‎effects of climate change depends, to ‎a great extent, on the regulatory ‎measures that they enforce, on the‎policies that they adopt and the ‎projects that they implement.‎ The UfM stands ready to support, hand in hand with ARLEM, ‎those efforts to help local and ‎regional authorities face this common ‎challenge.‎“

According to the recent report of the MedECC Network on Climate and Environmental Change in the Mediterranean, gathering over 80 experts and scientist, the Mediterranean region warms 20% faster than the global average.

Karl-Heinz Lambertz, President of the European Committee of the Regions and ARLEM Co-chair declared: “The European Union has reaffirmed its climate leadership by proposing the Green Deal as a path towards climate neutrality. Climate change knows no borders, which is why we must also work closely with our neighbouring partners so we all accelerate our efforts to adapt and build resilience.  We must expand this sustainable growth model and establish a Green Deal specific for the Mediterranean, offering a climate pact that strengthens cooperation and which offers new financial tools to deliver climate action across the region.“

The Assembly also adopted the report ‘Euro-Mediterranean integration: The role of regional and local authorities‘ by Jihad Khair, Mayor of Beit Sahour, Palestine and saw the appointment of Musa Hadid, Mayor of Ramallah and Chair of the Association of Palestinian Local Authorities , as co-chairman of ARLEM representing non-EU members.

The 2nd edition of the ARLEM Award for young local entrepreneurship in the Mediterranean went to Rima Dates, an Algerian company that produces dates-based products such as syrup, dates vinegar and stuffed dates with nuts and chocolate. 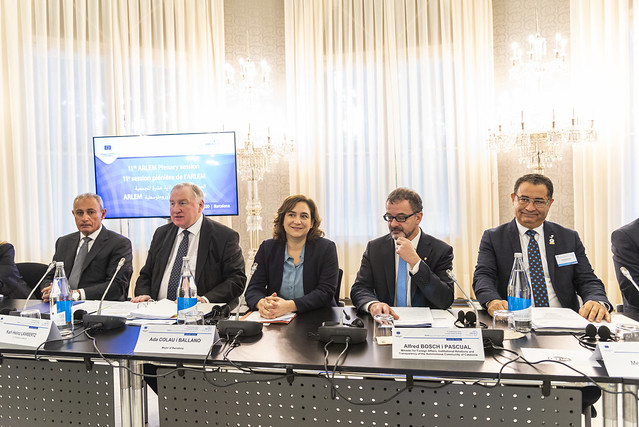