The Mediterranean region warms 20% faster than the rest of the world. With current policies, temperatures are expected to increase 2.2 ºC by 2040. These are some of the alarming conclusions of the ground-breaking findings of the first-ever scientific report on climate and environmental change in the Mediterranean area. 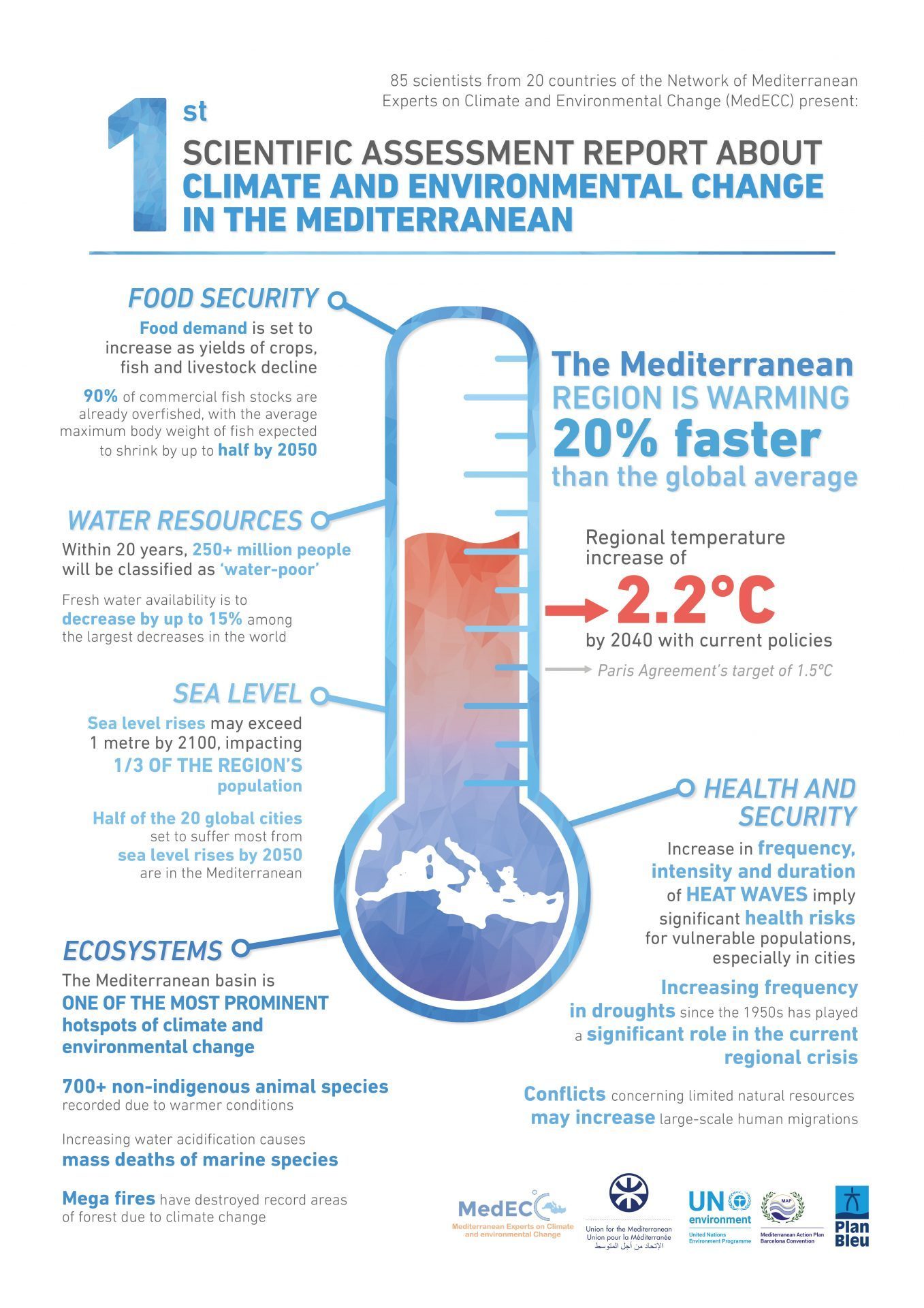 Recent accelerated climate change has exacerbated existing environmental problems in the Mediterranean Basin that are caused by the combination of changes in land use, increasing pollution and declining biodiversity. In most impact domains (such as water, ecosystems, food, health and security), current change and future scenarios consistently point to significant and increasing risks during the coming decades.

Policies for the sustainable development of Mediterranean countries are urgently needed to mitigate these risks and consider adaptation options, but policy-makers lacked adequate information — particularly for the most vulnerable southern Mediterranean societies, where fewer systematic observations schemes and impact models are based.

As a result, the network of Mediterranean Experts on Climate and Environmental Change (MedECC) was created in 2015 as an open and independent regional scientific expert network, supported by the UfM and the UN environment. 190 scientists from 25 countries, all contributing in individual capacity and without financial compensation, have been developing reports with the aim to facilitate more effective policy responses to climate change.

After preliminary conclusions published in 2019, the second phase of the assessment resulted in the publication of the complete Mediterranean Assessment Report on ‎Climate and Environmental ‎Changes and its Summary for ‎Policy-Makers. The main conclusions will be presented during the 2nd UfM Ministerial on Environment and climate actions to take place on the 4th of October in Cairo.

Among its main conclusions, the report shows that the Mediterranean basin warms 20% faster than the global average, and that the region is one of the main climate change hotspots in the world, where 250 million people are projected to be considered “water poor” within 20 years. With current policies, temperatures are expected to increase by 2.2ºC (compared to pre-industrial level) by 2040.

As a result, the network of Mediterranean Experts on Climate and Environmental Change (MedECC) was created in 2015 as an open and independent international scientific expert network acting as a mechanism for decision-makers and the general public on the basis of available scientific information and on-going research. The creation of this network is supported by key regional institutions such as UN Environment/MAP through the Regional Framework for Climate Change Adaptation in the Mediterranean, and the Union for the Mediterranean through its Expert Group on Climate Change (UfM CCEG). MedECC gathers more than 600 scientists from 35 countries. Its Secretariat is hosted by Plan Bleu in Marseille.

In December 2019 the preliminary results of MedECC’s assessment on the risks associated to climate and environmental changes in the Mediterranean were published. Taking stock of the conclusions, the UfM Ministers of Foreign Affairs acknowledged the urgent need to address the impact of climate change in the Mediterranean region and shift towards sustainable consumption and production patterns for a green and low emission economy.

“No single nation, no single community, in our region has enough resources to cope with the pace of climate change on its own. Undeniably, in line with the Sustainable Development Goals, our common efforts in the next decade have to focus on facing this urgent issue that goes way beyond climate change and implies reconsidering our approach to the region’s limited resources”, UfM Secretary General Nasser Kamel underlined at the UfM Regional Forum on 10 October 2019, when main conclusions of the report were presented.

In October 2021, Ministers from the 42 Member countries of the Union for the Mediterranean (UfM) gathered in Cairo at the 2nd UfM Ministerial Conference on Environment and Climate Action to reiterate the urgency and discuss ways to steer the action towards a clean, competitive, resilient and inclusive Mediterranean for the health and well-being of all citizens in the region.