14 November 2019, Ljubljana. The Creative Forum Ljubljana, organised by the Slovenian Ministry of Foreign Affairs and the Union for the Mediterranean, is taking place in Ljubljana from 12 to 15 November. The Forum provides capacity building and networking opportunities as well as room for debate and policy review. It is an advocate for policy change that aims at creating an enabling environment for the cultural and creative sector at the regional level.

The UfM Secretary General, Nasser Kamel, emphasised: “Conducting a proper mapping of major actors, facilitating access to finance, developing platforms for networking and exchanging of best practices, as well as adopting a multi-stakeholders’ approach are all elements of an enabling environment for the cultural and creative sector that we all would like to see in our region.”

The Forum brought together more than 200 representatives of creative hubs, entrepreneurs, civil society and high representatives of EU institutions, ministries from both regions, international and local organisations. In addition to Slovenian ministers Miro Cerar and Zoran Poznič, and the UfM Secretary General as organizers, the Forum was attended by the Algerian Minister of Industry, Djamila Tamazirt, the Montenegro Minister of Culture, Aleksandar Bogdanović, and the Kosovo Minister of Economic Development, Valdrin Lluka, the Palestine Minister of the Economy, Khaled Al-Osaily.

While its first edition in April 2018 reviewed the regional state of affairs in the cultural and creative sector, this year’s Forum set the ground for collective action. Under the title “Creative Capital United”, the forum was held as a push to unite forces at a regional and sectoral level from education to the economy and policy making.

The Forum was inspired by the Positive Agenda for Youth – a Slovenian initiative that was first launched in the Western Balkans and, in 2017, was integrated in the Roadmap of the Union for the Mediterranean. The lack of prospects for young people is among the most pressing regional challenges and the cultural and creative sector is transformative in generating jobs and opportunities, especially for the vulnerable social groups. The forum’s objective was to demonstrate the potential of clusters and creative industries as a driver of economic growth and social resilience in the Southern Mediterranean region.

The speeches from other keynote speakers like Macedonian architect Jana Konstantinova and the legendary Slovenian inventor Peter Florjančič are available through the live streaming link: https://livestream.com/zivo/CreativeForumLjubljana2019.

Read the Outcome Document of the II Creative Forum Ljubljana 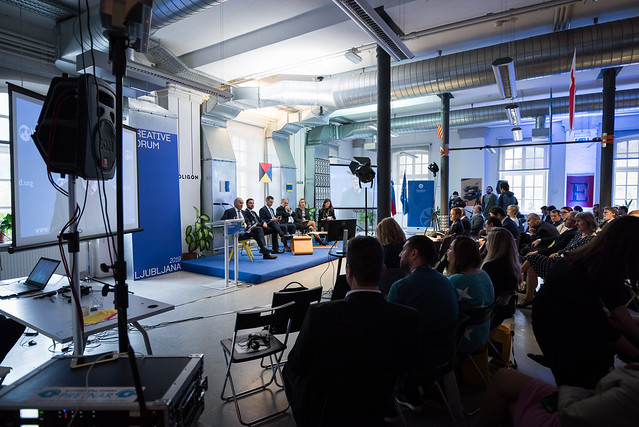