Promoting gender equality in the Mediterranean: a priority that has become obvious!

Serving the Union for the Mediterranean for the past four wonderful and rich years has been a joy and an honour for me. I came to Barcelona in April 2013, in the midst of preparations for the UfM Ministerial Conference on “Strengthening the Role of Women in Society”. No other UfM Ministerial Conference had taken place since 2011 and there was great uncertainty about our collective ability to succeed in drawing up a declaration supported by all parties.

Despite the difficulties encountered, the shared desire to reach a consensus on such an important subject prevailed. Preceded by a meeting at the Élysée Palace with the President of the French Republic, the Paris Conference was held on 11 September 2013. The Conference resulted in the adoption of a comprehensive declaration, accompanied by strong commitments from governments to deal with a whole range of questions linked to women’s empowerment: to increase the participation of women in political, economic and social spheres; to fight against violence and discrimination, and to encourage changing stereotypes through education and the media.

For the first time, the declaration created a follow-up mechanism which obliged States parties to report on progress made, and it required the UfM Secretariat to promote operational projects. Responsible for the “Social and Civil Affairs” Division and with the full support of Secretary General Fathallah Sijilmassi and the UfM Executive Council under the co-presidency of the European Union and Jordan, I focused our actions on strengthening women’s place within society. Indeed it seemed obvious to me that this issue was not only beneficial for women. Gender equality is a fundamental human right. It is essential for development and cooperation in our Euro-Mediterranean region. It is a condition of progress and fulfilment for inclusive and peaceful societies.

Granting women their full rights and giving them equal access to all opportunities should therefore be a key response to our region’s challenges. We have therefore progressively built the UfM’s strategy around the subject of women’s empowerment, first and foremost with concrete projects.

The first project launched by the UfM in April 2013, titled “Young Women as Job Creators”, had the benefit of addressing three essential dimensions: women, young people and job creation. Several other projects followed that, among others, tackled vocational training, the education of young people in equality and citizenship issues, women entrepreneurship, cancer prevention in women, and finally, in partnership with the Euro-Mediterranean Women’s Foundation, the construction of common tools to strengthen the capabilities of women. Another challenge has also been that of “mainstreaming”, i.e., using this approach to equality in other priority areas of the Secretariat: business development, higher education and research, water and the environment, urban development and transportation, energy and climate change, etc. The second approach has involved working on public policies through the launch of a regional dialogue on women’s empowerment in May 2015. The UfM Member States as well as regional and international stakeholders have participated in this dialogue.

The aim was to prepare a report on the implementation of commitments adopted by the UfM Ministerial Conference in Paris in 2013 to identify difficulties and constraints (of which there are many!), collate good practices, improve regional cooperation, strengthen synergies between stakeholders, and formulate recommendations for the purposes of a more precise operational ministerial declaration in 2017. This exciting process has been adopted and it has been further bolstered by a strong commitment given by UfM Member States and our partners. Furthermore, an extremely comprehensive progress report has been written which will act as a solid basis for the Cairo Conference in November 2017.

Using our role as a regional platform for dialogue and cooperation, we have furthermore organised a high-level conference in Barcelona each year on women’s empowerment, seeking to tackle the most current and sensitive issues: the promotion of women entrepreneurship, the impact of new technologies, the role of women in climate change and sustainable development, the fight against extremism and radicalisation, mobility and migration, etc. Each edition has seen political or economic personalities, experts, organisational leads and grassroot-level representatives share their personal and collective experiences, shed light on complex challenges, debate solutions and decide together on the actions to be taken.

In order to advance the regional agenda on women, the UfM Secretariat has finally formed partnerships with multiple stakeholders, such as international organisations, using an open and inclusive approach, by creating regional networks and strengthening coherence and synergies between actions. The main partners include, of course, the European Union, UN Women, UNDP, ILO, UNIDO, UNESCO, Parliamentary Assembly of the UfM, ARLEM, the European Council, and various private sector and civil society stakeholders. I recently stepped down from the UfM Secretariat but I know that I will also obviously continue to promote the role of women in my new roles with the FAO, PAM and FIDA.

I also know that the “Social and Civil Affairs” (SCA) Division, under the direction of Laurence Païs who has taken over from me, and with all the capabilities of the team comprising Fatiha Hassouni, Meriem El-Hilali, Juli Hernandez and colleagues from the Secretariat, will continue to act decisively to strengthen regional cooperation in the Mediterranean by promoting the role of women as agents of change, policy makers, drivers of inclusive growth and spokeswomen for our societies. 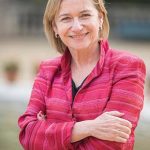 Delphine Borione, Permanent Representative of France to the Food and Agriculture Organization

Delphine Borione is a French diplomat who has held numerous bilateral and multilateral positions in the areas of sustainable development and economic, cultural and educational cooperation. After being Senior Deputy Secretary General of the Union for the Mediterranean (UfM), from 2013 to July 2017, she is now ambassador, Permanent Representative of France to the United Nations organizations in Rome (FAO, WFP and IFAD).

She was the first ambassador of France to Kosovo (2007-2009), director of cultural policy and French at Quai d’Orsay and technical adviser to President Jacques Chirac at the Elysée. Delphine Borione is a former student of the Ecole Nationale d’Administration and a graduate of Sciences Po Paris. She is the author of numerous articles on the environment and climate change, culture, the role of women and Kosovo.