I am honoured to contribute these brief comments to the Union for the Mediterranean (UfM) Ministerial Conference on Women. I believe we must place the well-being of women, children, and adolescents at the centre of global health and development and also position health at the centre of the gender equality agenda. So the focus of your conference resonates strongly. The ambitious health and development targets in the SDGs will not be realized unless we improve the health, dignity and rights of women, children and adolescents. Investing in the health and well-being of women and girls is an investment in a better future. Women’s health and well-being matter not only to women but to their families and the society as a whole.

As a champion for sexual and reproductive health and rights (SRHR) I believe every woman and adolescent girl can decide whether, when and with whom she has a baby, and be able to prevent any unwanted pregnancies. Because when women and girls can access family planning, they have better control over their own lives, their education, their ability to work, and their ability to support their families. It really is one of the basic ingredients of sustainable development.

I also recognize that gender equality goes beyond SRHR. This is why WHO is pleased to partner with the unique intergovernmental framework of the Union for the Mediterranean in the “Women Right to Health” project. This project aimed at increasing access to cervical cancer prevention and management. Its goal was ambitions: 45,000 women in the appropriate age range will be offered a test for cervical (25- 65 yrs.) and breast (40-65yrs.) cancer and will be made aware of the risks and the importance of prevention.

Pilot screening projects have been initiated in all three target countries (Morocco Albania and Montenegro). Cervical cancer is a preventable disease, yet over a quarter of a million women die of cervical cancer each year, with 90% of deaths occurring in low- and middle-income countries. In the Mediterranean region cervical cancer is also of growing concern.

Since 2006, HPV vaccines are available that can prevent between 70 and 90% of cancer cases and WHO recommends girls between 9 and 14 years of age to be vaccinated. By 2017, globally, just over a third of countries have introduced HPV vaccination in their national vaccination schedule. However, large inequities exist: whereas 70% of high income countries have introduced HPV vaccination, only 20% of middle-income and 6% of low-income countries have done. Globally, in 2015, only 12% of countries reported cervical cancer screening programmes with participation rates greater than 70% with participation rates higher in high income countries. Women who need the services most are the ones most likely to miss them as they may not know of the services or may not be able to access the service.

Cervical cancer is highly curable when detected in earlier stages, but five year age standardized relative survival rates (proportion of people surviving five years after diagnosis) vary from 13% in Uganda to 79% in South Korea. As you can see from these statistics, cervical cancer is an example not only of science and medicine but also of equity. One of the great benefits of the gender equality movement is it also encourages to look at equity more generally. Of course we need better gender and income disaggregated data to do a better job of applying this equity lens.

[ufm_quote]”Pilot screening projects have been initiated in all three target countries (Morocco Albania and Montenegro). Cervical cancer is a preventable disease, yet over a quarter of a million women die of cervical cancer each year, with 90% of deaths occurring in low- and middle-income countries. In the Mediterranean region cervical cancer is also of growing concern..”[/ufm_quote]

Against this backdrop, it is obvious that more needs to be done – particularly for poor and vulnerable women. The new UN Global Joint Programme (Joint Programme) will implement the World Health Organization (WHO) comprehensive approach to cervical cancer prevention and control which consists of: (i) introduction and scaling-up of HPV vaccination; (ii) introduction and expanding coverage of screening and treatment of precancerous lesions; (iii) prompt management of invasive cancers; (iv) access to palliative care and; (v) monitoring using a standard set of indicators and tools to end cervical cancer. 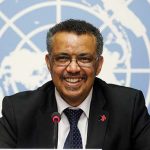 Dr Tedros Adhanom Ghebreyesus is globally recognised as a health scholar, researcher, and diplomat with firsthand experience in research, operations, and leadership in emergency responses to epidemics. He was elected as WHO Director-General in May 2017. Immediately after taking office Dr Tedros outlined five key priorities for the Organization: universal health coverage; health emergencies; women’s, children’s and adolescents’ health; health impacts of climate and environmental change; and a transformed WHO.

Prior to his election as WHO Director-General, Dr Tedros served as Ethiopia’s Minister of Foreign Affairs from 2012–2016. In this role he led efforts to negotiate the Addis Ababa Action Agenda, in which 193 countries committed to the financing necessary to achieve the Sustainable Development Goals. Dr Tedros also served as Ethiopia’s Minister of Health from 2005–2012, where he led a comprehensive reform of the country’s health system. Throughout his career Dr Tedros has published numerous articles in prominent scientific journals, and received awards and recognition from across the globe.