Empowering women in the Euro-Mediterranean region: UfM Conference marks the launching of projects and financing agreements on gender affairs

Barcelona, 27 March 2014. The Secretariat of the Union for the Mediterranean (UfM) held on 26-27 March 2014 at its headquarters in Barcelona, an international project-oriented conference under the title “Women’s Socio-Economic Empowerment: Projects for Progress”. As an operational result from the Third Union for the Mediterranean Ministerial Conference on Strengthening the Role of Women in the Society (Paris, 11 September 2013), the objective of the conference was to create a strong momentum for the women’s socio-economic empowerment in the region, and encourage the implementation of projects and initiatives in the field of gender affairs. 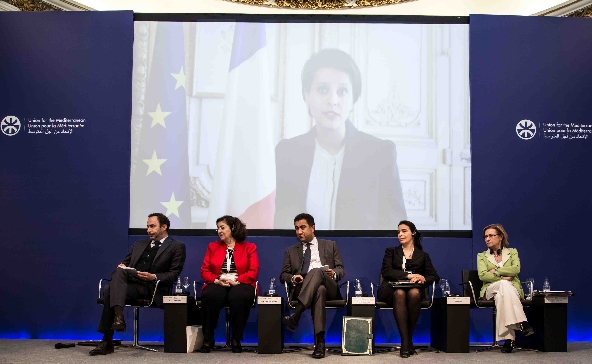 Over the last 30 years, female participation in the Southern Mediterranean region’s labour force has grown at a rate of only 0.17% annually. Only 25% of women in the region are employed or actively searching for a job. A stronger role of women and youths is necessary to build economically prosperous and socially stable societies.

The exchanges over the course of this two-day meeting served to reach the following results:

Skills for Success is an employability-skills training programme aimed to provide economically disadvantaged girls and young women who have completed secondary school (aged 15-20) with specific knowledge, skills and tools to enter the job market. The programme encompasses training in English language and enhanced professional skills, including computer and business skills development, as well as job search tools and advice.

The implementation of the first phase of the project will target unemployed women in Jordan, Tunisia and Morocco and will start in the coming months. The second phase will take place in Egypt and Lebanon in late 2014 and early 2015. The programme is expected to expand to additional locations and increase the number of training cycles conducted annually, to potentially reach some 1,800 unemployed women per year. Co-funding for the project’s first phase has been granted by Norway and Flanders.

Young Women as Job Creators was officially launched in April 2013. The project promotes self-employment and entrepreneurship through Women Entrepreneurship Days, a series of seminars conducted by national businesswomen associations, providing young female university students with specific training and coaching to create new businesses. The project’s first phase was successfully implemented in 2013 in 32 universities from Jordan, Morocco, Palestine and Spain. Some 800 young women received specific advice and mentoring on how to become successful entrepreneurs and future job creators. The second phase of the project is foreseen to be implemented during 2014 in Albania, Egypt and Tunisia, in addition to the four initial countries. The third phase will further include Turkey, Algeria, Lebanon and Croatia.

The UfM Secretariat signed two funding agreements with the Norwegian Royal Ministry of Foreign Affairs and the Flemish Department of Foreign Affairs for an amount of approximately €1 million. The contributions will cover the projects and initiatives carried out by the Secretariat of the Union for the Mediterranean in the field of gender equality.

Other agreements with potential funders and International Organisations were also discussed during the conference. A collaboration agreement with UN Women is expected to be finalised in the coming month. An agreement has been recently signed with the International Labour Organisation (ILO) to work together in the field of Women Empowerment.

Bringing Northern and Southern Mediterranean funders and project promoters on the ground closer together, this Conference aims to become a permanent platform for the creation of partnerships and the launching of regional projects in the Mediterranean region.

The UfM Secretariat will organise in the coming months a series of seminars and workshops on specific issues such as job creation, creating value in the production of handicrafts, promotion of sustainable tourism, social and solidarity economy, education and vocational training, and women’s access to positions of responsibility. A subsequent project-oriented conference on women empowerment will also take place to ensure a permanent dynamic and a continuity of the process.

HIGHLIGHTS OF THE CONFERENCE

Download Speech of the Secretary General of the Union for the Mediterranean, Fathallah Sijilmassi

Main conclusions of the conference