Barcelona, 19 December 2014. Today, the the recently appointed Chancellor of the Euro-Mediterranean University of Fes, Mr. Mohammed Kabbaj, and the President of the Euro-Mediterranean University of Fes, Prof. Mostapha Bousmina, met with the Secretary General of the Union for the Mediterranean, Mr. Fathallah Sijilmassi, the Deputy Secretary General for Higher Education and Research, Prof. Ilan Chet, and UfM representatives to discuss the latest advancements in the project and the next steps towards the establishment of the University. 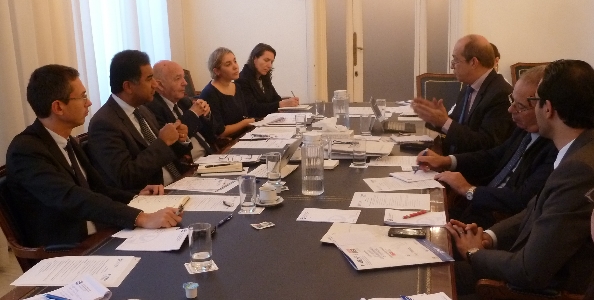 2014 has witnessed the signature of a convention for the launch of the Euro-Mediterranean Institute of Technology (INSA Euro-Méditerranée) as the first Euro-Mediterranean establishment for engineer training. The diplomas awarded to these engineers will be recognised by the Moroccan government, the French government and the European Network for Accreditation of Engineering Education.

In October 2014, the UEMF launched a call for applications to recruit executives and professors specialised in Environmental Engineering and Renewable Energy (Wind, Solar Photovoltaic, Solar Thermodynamic and Biomass), as part of its permanent staff. The UEMF also seeks to recruit a Director of Human Resources and a Director for its Office of Technology Transfer and Career Development. Some additional 15 vacancies related to the university’s Euro-Mediterranean Institute of Technology (INSA Euro-Méditerranée) are also available.

The first two accredited Master’s degree programmes in the fields of Environmental Engineering and Renewable Energies were launched last November 2014.The academic programmes will be implemented in temporary offices located in Fès-Shore. 300 students are expected to be enrolled by September 2015, including those 192 enrolled in INSA Euro-Méditerranée.