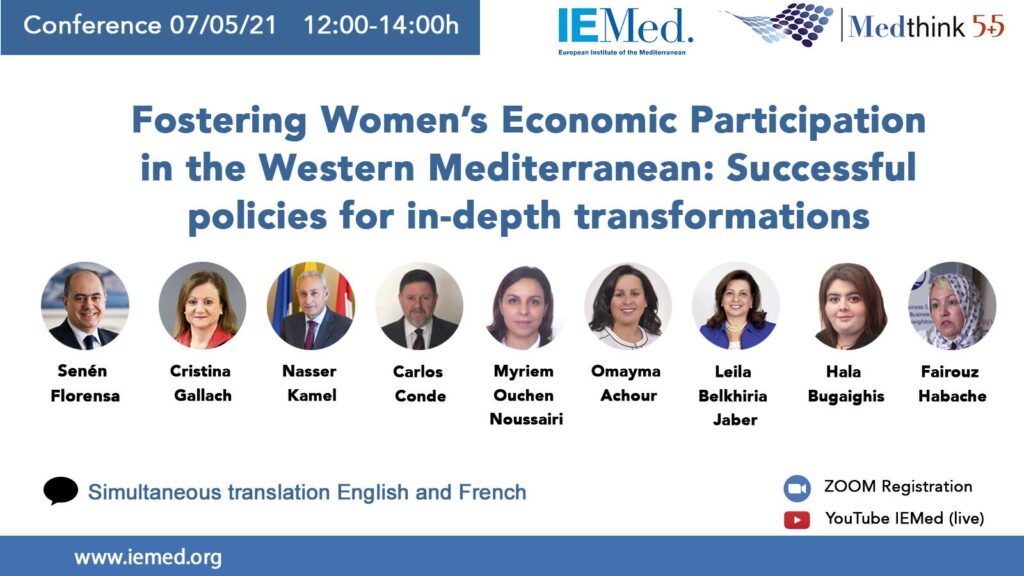 07 May 2021. Since its inception in May 2016, the MedThink 5+5 network of think tanks of the Western Mediterranean has organised several annual fora and thematic seminars, during which experts from the whole of the region analysed the factors underpinning economic, human and sustainable development, as well as security and stability in the Western Mediterranean. The MedThink 5+5 network provides a multidisciplinary platform of debate linked to the 5+5 Dialogue, which contributes both to regional cooperation based on a bottom-up approach and to strengthening the network.

In line with the UN 2030 Agenda, and particularly with the SDG number 5 (Achieve gender equality and empower all women and girls), this online conference seeks to present gender equality as a cross-sectional axis to build more prosperous, inclusive and sustainable societies. Drawing upon the gender indicators validated by the 42 UfM countries in 2020 and presented at the UfM Regional Dialogue Meeting on Women’s Empowerment, this conference will map the gender economic disparities that traverse the Western Mediterranean area whilst presenting successful practices that foster economic participation of women in the countries of the area. Speakers from different backgrounds, including public decision markers, representatives of international organisations and civil society organisations, will highlight national initiatives that have already made an impact at the economic and public policy levels. The dialogue ensuing from the discussion and the exchange of good practices will lead to the creation of public policy recommendations that aim at paving the way for in-depth economic and social transformations.

With the participation of: