Women are having a vital and decisive role in the social, economic and political development. They have achieved great success in terms of enhancing women’s status in all aspects of life, thus enacting radical changes in the perception of women and their role in various and diverse fields, in particular leadership and decision- making, specifically in the last decades, where women were able to chart a new enhanced path through their contribution and success. However, the international and regional context are endangering these achievements and our societies still need to support the empowerment of women and capitalize on their capabilities and great potentials, especially in light of the political openness in the Arab world which pushes forward towards new horizons in the field of human rights and political contribution and participation of the citizens , women and men in turn leading to the progress and the achievement of sustainable development at all levels.

Women in the region have faced many challenges due to increasing violence of extremist groups; whereas extremism, intolerance and exclusion have impacted the area and threatened previous achievements. Such regression has weakened the concept of gender equality and the enjoyment of women’s rights. The massive influx of Syrian refugees and displacement has generated human tragedy for millions of people and dire results for hosting governments and societies. Women and girls refugees are disproportionately affected. Violence, child labor, trafficking for sexual exploitation, and early marriages are on the rise.

Besides, the ongoing occupation of Palestine remains a central problem and source of violence in the region, preventing women from achieving their rights. Occupation is a barrier to democratic development, creating continuous conflicts that affect societies. Women pay the price on all levels, struggling not only for women’s rights and equality but for independence, in the process losing their children and husbands.

Jordan, a country with limited natural resources, has devoted much effort to developing its human resources. For the purpose of achieving sustainable economic growth, the country introduced policies, programs, and plans with the ultimate aim of societal development.

Jordan has made significant steps in the reform process. There is political will to achieve equal opportunities and non-discrimination as articulated in the Constitution, National Agenda, and the Civil Service Bylaws. Jordan is recognized as making continuous progress in achieving the Millennium Development Goals (MDGs). It has also been a pioneering country in the region in the area of anticorruption legislation, strategies and action plans within the public sector.

Jordan is committed to the 2030 Agenda and to leaving no one behind. The Government of Jordan has submitted its first Voluntary National Review (VNR) which refers to the 2030 Agenda for Sustainable Development and presented it at the High Level Political Forum in July 2017.

[ufm_quote]”The Union for Mediterranean Secretariat works hard through projects and initiatives to address women’s empowerment and gender equality issues in the subterranean region. It plays a vital role in organising annual high level meetings on Women’s Empowerment to identify, in partnership with key regional actors, specific and strategic solutions to promote the full participation of women in society.”[/ufm_quote]

While the status of Jordanian women has improved considerably in regards to education, health, and life expectancy, advances in these spheres have yet to fully bridge the gender gap. Constraints persist in areas such as representation and participation in the political sphere, employment and visible advances in the labour force, and equities in the social domain. Gender disparity in Jordan has particularly increased during the recent years with the spread of conservatism and nationalism, which has caused regressive backlash against women’s rights and gender equity.

The Union for Mediterranean Secretariat works hard through projects and initiatives to address women’s empowerment and gender equality issues in the subterranean region. It plays a vital role in organising annual high level meetings on Women’s Empowerment to identify, in partnership with key regional actors, specific and strategic solutions to promote the full participation of women in society. It gathers many countries’ members together to talk loudly about the solutions and ideas made to boost women empowerment and gender equality in the region. 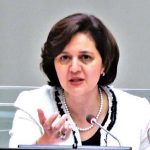 Ms. Lattouf has over 20 years of experience in development and public sector work; she held several posts with the Jordanian Government starting at the Ministry of Tourism, Secretary General for the Ministry of Planning and International Cooperation, Public Sector Reform Ministry and Senior Advisor for Public Sector Reform at the Prime Ministry. She has been recently appointed as a Minister of Social Development, where she held the post for over three years in the past. Prior to her job as a Minister, Ms. Lattouf was the Office Director for Her Majesty Queen Rania Al Abdullah; she also worked with UNDP as head of the poverty and gender team and with the World Bank as a project director