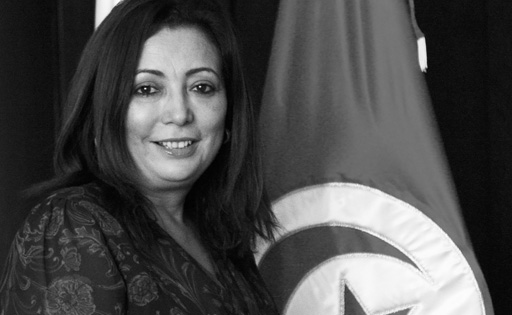 Together with three other Tunisians, Ouided Bouchamaoui was awarded the 2015 Nobel Peace Prize for securing the transition to democracy after the Arab Spring in her country. But this is not where her story started or where it ended…

“In Southern countries, governments don’t have the ability to invest or to face economic problems. It’s the private sector’s role to get together, campaign and promote investment.” Ouided Bouchamaoui is an entrepreneur at heart. It is her passion, her talent, her heritage. Her grandfather was an entrepreneur, he started his own civil engineer company. Her dad took over and made it grow to become Hédi Bouchamaoui & Sons. Bouchamaoui herself is now the leader of the Tunisian Confederation of Industry, Trade and Handicrafts (UTICA), she has been since 2011, following the Tunisian revolution. She also leads her own firm, specialised in cotton “to make it in the entrepreneurial world, you need to like risk. You need to believe in yourself and you need fair play, because in business, you lose, you fall, you stumble but you need to get back up. You need to love challenges, without challenges, you can’t win, you can’t aspire to a better world.”

A better world was what the youth of the Arab Spring hoped for in 2011. When the revolution broke out, when the youth demanded “dignity and work”, when conflict rose, Bouchamaoui, as the head of UTICA gathered around the negotiation table with three other unions: The Tunisian General Labour Union, the Tunisian Order of Lawyers and the Tunisian Human Rights League. They formed the National Dialogue Quartet. “We gathered, the four presidents of national organisations and we thought of the best way to bring together people from different political background to find a solution to the political crisis. To solve the lack of confidence the Tunisian people had in the political regime.” Once the quartet agreed on a roadmap, they used it as a basis to have a peaceful national dialogue. This enterprise got them the 2015 Nobel Peace Prize.

The Tunisian entrepreneur holds her region dear in her heart but beyond that, she sees opportunities for southern countries which will invest in cooperation. “In the absence of political will, it is civil society that will be the pillar of Mediterranean cooperation. It will have to convince politicians to unite, think macro and think together.” Her experience in Tunisia, negotiating, bringing together people from all sides of society, taught her that dialogue is the best tool to deal with political conflict. “I stay convince that dialogue is always the best option to find solution to conflicts, to find serenity and prosperity”.

In 2019, the Summit of the Two Shores brought together civil society representatives to foster a rich exchange between Mediterranean countries. It was presided by Ouided Bouchamaoui. “Foundations, organisations and civil society came together to put projects on the table, discuss our point of views, forget our origins, skin colour, religion, and getting to work on Mediterranean prosperity.” For the Nobel Peace prize laureate, Mediterraneans “have the same ambitions, we want to invest, we want to grow, we want to invest in new markets, conquer the world and keep competition alive. Competition means progress, which means prosperity.”

For Bouchamaoui, the youth and women should take centre stage, after years of being disregarded. “The Mediterranean youth needs to believe in their capacities, they can’t give up, they have the means and the capability to make it. Without the youth, we won’t be able to go on. They are an important pillar of the Mediterranean.”

Last November 2020, Ouided Bouchamaoui gave a keynote speech on the occasion of the celebration of the 25th anniversary of the Barcelona Process, during the Union for the Mediterranean’s Regional Forum, highlighting the importance of civil societies in the Mediterranean space.