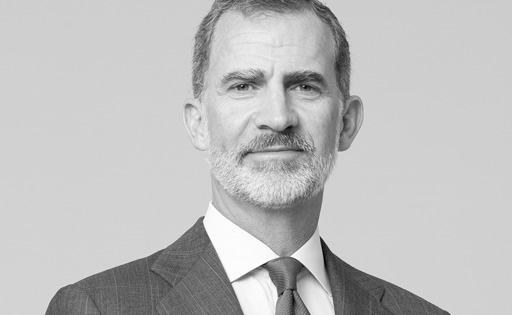 His Majesty the King of Spain, Felipe VI

25th Anniversary of
the Barcelona Process

“Now more than ever, we need to develop a renewed and proactive Euro-Mediterranean policy together, adapted to the current challenges and opportunities, with the ultimate aim of making the Mediterranean an open and inclusive area”

Twenty-five years ago, the city of Barcelona, known historically for its position facing the Mediterranean, hosted what we can call a historic event. I am referring to the Barcelona Conference, which brought together the former 15 EU Member States with their Mediterranean partners and launched the so-called ‘Barcelona Process’, institutionalised years later within the framework of the Union for the Mediterranean.

The historical significance of this occasion was not only thanks to the number and diversity of its participants but also the spirit of harmony and the vision of a united future that made it possible. This led to an agreement on an ambitious political declaration and a very detailed work plan to turn the Mediterranean into a peaceful and stable region, of shared prosperity and mutually enriching respect, home to exchanges in the human and cultural spheres.

When taking stock of the past in order to resolutely face the future, we must recognise that the expectations raised then have yet to be fulfilled and although we are getting closer to that goal, we are still a long way from accomplishing it. The geopolitical circumstances that defined the Euro-Mediterranean region in 1995 have changed considerably over the past 25 years, and not always for the better.

Today the situation is much more complex and difficult to manage. A series of conflicts and tensions that overlap and feed off each other at the same time, as well as growing economic and social inequalities, together with cultural divides, all threaten to jeopardise the very essence of our Euro-Mediterranean project.

This is further compounded by an extreme health emergency, which has demonstrated the uniqueness of the Euro-Mediterranean region and the importance of its geographical proximity. In these circumstances, we cannot be discouraged. On the contrary, now more than ever, we need to develop together a renewed and proactive Euro-Mediterranean policy, adapted to the current challenges and opportunities, with the ultimate aim of making the Mediterranean an open and inclusive region. Such a policy should include a genuine programme of cooperation and integration between the two shores of the Mediterranean, in order to resolve and prevent conflict and tension.

If we do not take this approach, sooner or later we will find ourselves facing an increasingly unstable and unpredictable Mediterranean, which could become the dividing line between ever more distant worlds.

I am pleased to learn that the Regional Forum of the Union for the Mediterranean in November, as well as the meeting of the Ministers of Foreign Affairs of the EU countries and the Southern Neighbourhood, were both held with the clear intention of preventing this situation from becoming a reality.

In these uncertain times, opinions are sometimes voiced that indicate a certain weariness, bordering on disinterest when it comes to this project. The anniversary we are celebrating represents a great opportunity to raise our voices, in unison, and declare that if we succeeded in 1995, we will succeed now too. There is no shortage of experience and knowledge. The necessary tools are there, as well the political will to update them so they can achieve their full potential. It’s as true today as it was yesterday that the secret lies in a shared sense of responsibility and clarity of purpose.

(Transcript edited by the UfM Secretariat. Original text in Spanish of speech by his Majesty the King of Spain at the opening of the 5th Regional Forum of the Union for the Mediterranean – 27th of November 2020)