Tangier, 19 July 2016. MedCOP Climate 2016, held in Tangier on 18 and 19 July 2016, furthered the development of a Mediterranean climate agenda. MedCOP Climate was both a crucial milestone in the region’s preparations for COP22, to be held in Marrakesh on 7-18 November 2016, and a milestone in the implementation of the Paris Agreement, through specific regional actions.

The Secretariat of the Union for the Mediterranean (UfM), an institutional partner of the Tangier region for this edition of MedCOP Climate 2016, has been helping to develop these initiatives. The UfM Secretary General, Fathallah Sijilmassi, declared that “The fight against climate deregulation in the Mediterranean region can only be won by strengthening regional cooperation and developing concrete schemes. This is the UfM’s core business. So it was natural for the UfM Secretariat to be not just a partner in this great forum of exchange that is MedCOP Climate 2016, but also to contribute with projects that have a regional impact”.

The UfM Secretariat also held its third meeting of the Regional Committee for Cooperation on Climate Finance on 18 July 2016. This committee was set up by the UfM and it brings together the principal international funders of climate initiatives in the Mediterranean (Green Climate Fund, Global Environmental Facility, the European Investment Bank, the European Bank for Reconstruction and Development, the UNEP-DTU partnership, etc.). Its goal is to promote cooperation and to make funding of climate projects and initiatives in the Mediterranean more efficient for cities by sharing experiences and information among funders. The third meeting of the committee put finance providers, donors and various specialist UN agencies in contact with the Mediterranean networks that are working for sustainable cities in order to discuss the funding of these cities in their fight against climate deregulation.

MedCOP Climate 2016 was also the occasion for the launch of the UfM Energy University by Schneider Electric. This project sets out to provide free online training on renewable energy and energy efficiency. These free online courses are aimed at professionals working in the energy industry in UfM countries. The courses are offered and the certification is recognised by 23 international industry associations.

Through these actions, and in close collaboration with all the Mediterranean stakeholders, the Union for the Mediterranean, under the leadership of its two co-presidencies, the European Union and Jordan, is thus helping to develop a Mediterranean climate agenda. It is essential to build this shared agenda in order to better capitalise on the opportunities provided by low-carbon and sustainable development in the region.

The UfM’s action against climate change is part of a global process. On a regional level and through specific actions, it is helping to implement international commitments. This action takes the form of promoting regional dialogue (notably through the UfM Climate Change Expert Group) and the roll-out of specific projects such as the Tafila Wind Farm Project in Jordan; the Integrated Programme for the Protection of Lake Bizerte against Pollution in Tunisia; the sustainable development of the Bouregreg valley (as part of the Urban Project Finance Initiative – UPFI); and the development of green industries and the adoption of sustainable consumption and production models through the Med RESCP – POST RIO +20 scheme (a complete list of the projects is available here). 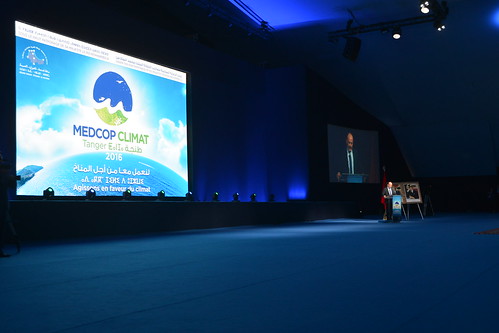