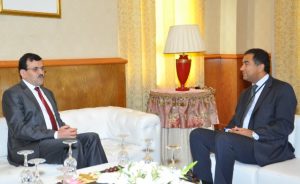 Tunis, 18 September, 2013. The Mediterranean Economic Conference on “Employment and Territorial Development”, which took place on 17-18 September in Tunis, brought together more than 300 participants from 25 member countries of the Union for the Mediterranean. The event counted on the participation of the Ministers of Employment of Morocco, Jordan, Tunisia, Libya and Palestine, and the EU Special Representative for the Southern Mediterranean Region. It also gathered influential practitioners in the area of local development and job creation, as well as European institutions, intergovernmental organisations, international financial institutions and business leaders from the private sector.

Conceived as a platform for reflection, exchange of experiences and definition of actions to address the unemployment challenge in the region, the conference witnessed the launch of the Mediterranean Initiative for Jobs (Med4Jobs). Med4Jobs is a flagship regional programme developed by the UfM Secretariat to help increase the employability of youth and women in the Eastern and Southern Mediterranean region, leverage job creation and foster a culture of entrepreneurship and private sector development. The programme will identify and disseminate existing best practices, and will promote the implementation of concrete projects aimed to bridge the gap between job supply and demand.

On the margins of the conference, UfM Secretary General Sijilmassi held bilateral meetings with the Minister of Foreign Affairs of Tunisia, Othman Jerandi, and the President of the African Development Bank, Donald Kaberuka, at the headquarters of both institutions, in Tunis.

With an average unemployment rate of 25%, it is estimated that the Southern Mediterranean countries will need to create 22 million jobs by the year 2020 to cater for the new generations of youth and women entering the labour market. This conference, together with other projects and initiatives promoted by the Union for the Mediterranean seek to address the pressing need to take action in the field of job creation and business development to overcome such important challenge for the future of the region.

Statement by  Ali Larayedh, Head of the Tunisian Government

” The destiny of the region is closely linked to the development programmes implemented by the Governments. Addressing the current regional challenges of the region is a shared responsibility. We need to enhance regional cooperation among all the Mediterranean countries “to overcome our common challenges”. The organization of this conference and the launch of the Med4Jobs initiative by the Union for the Mediterranean is a clear example of concrete regional cooperation actions seeking to address the common issues of unemployment and economic development. These actions and programmes effectively meet the concrete needs of the populations, having a direct impact on their lives and contributing towards security  and balanced regional development.”

Statement by Fathallah Sijilmassi, Secretary General of the Union for the Mediterranean

“The social and economic needs of the younger generations require concrete answers and solutions. It is in this spirit that the Union for the Mediterranean (UfM) is launching today the Mediterranean Initiative for Jobs (Med4Jobs) as an umbrella initiative for the implementation of concrete cooperation projects in the field of job creation and business development.”

Read the full speech of the UfM Secretary General