Cairo, 4 October 2021. The Ministerial Conference was chaired by Frans Timmermans, European Commission Executive Vice-President for the European Green Deal, on behalf of the EU, and Nabil Masarweh, Minister of Environment, Hashemite Kingdom of Jordan, hosted by the Arab Republic of Egypt, represented by Yasmine Fouad, Minister of Environment and in the presence of the Secretary General of the UfM Secretariat, Nasser Kamel.

This second UfM Ministerial Conference comes at a critical moment for the region only a few weeks ahead of COP26 and following a summer dominated by climate and environmental emergencies across the region. The dire warning calls of the Intergovernmental Panel on Climate Change and the network of Mediterranean experts on climate change (MedECC) also drew attention to the Mediterranean as one of the world’s hotspots of climate change. During the conference, Ministers acknowledged the urgency of taking action and reasserted a firm ambition to tackle climate and environmental challenges through the full implementation of the Paris Agreement and the Agenda 2030. Through the Declaration adopted at the conference, Ministers reaffirmed their commitment to lead by example and reflect the highest possible ambition by accelerating the transition towards fair, resilient, climate-neutral and resource-efficient economies in an attempt to limit average global temperature rise to 1.5°C, halt and reverse biodiversity loss and reduce air pollution.

Ministers stressed the importance of mainstreaming environment and climate action across all sectoral policies, including energy, industry, agriculture and transport, while mobilizing and scaling up resources to support the green transition. Investments and sustainable finance featured high on the agenda, as well as the need to step up action on adaptation and to reinforce the science-policy nexus. Ministers reaffirmed the need to progressively reduce the use of fossil fuels, ensure a just transition and engage all stakeholders in environmental and climate policy-making as well as the importance of supporting women and youth engagement in building resilience and driving the green transition.

The UfM Secretariat was mandated to support the implementation of the objectives of this Declaration and monitor the progress through its Environment and Climate working group.

High-level representatives of International Financial Institutions and UfM Senior Officials discussed the challenges and opportunities of the green transition in the Mediterranean in an event on investments organised  by the EU and the UfM at the margins of the ministerial conference. The discussion focused on potential trends and tools to accelerate the transition towards clean, fair and competitive economies in the region.

The Conference also saw the UfM hold a joint event with the United Nations Development Programme on Biological Diversity, Ecosystem Restoration and Food Systems. This helped establish the first steps to implement the recommendations outlined in Ministerial Declaration in this specific area. The importance of these steps was made clear by the latest IUCN reports, which indicate that some 62 million macro-litter items are floating on the surface of the Mediterranean basin.

The European Executive Vice-President for the European Green Deal, Frans Timmermans, said: “The climate crisis is existential for all of humanity – it transcends borders and politics. Building a sustainable future for all citizens across the Mediterranean is our shared responsibility. It is time to act and fulfil the commitments we all made under the Paris agreement. Today we have set a bold and ambitious vision for a clean, competitive, resilient and inclusive Mediterranean. I hope our joint ambition is an example for other regions to follow.”

The European Commissioner for the Environment Oceans and Fisheries, Virginijus Sinkevičius said: “The countries of the Mediterranean share a rich natural heritage, and a common concern for the effects of climate change, biodiversity loss and pollution. We now have a renewed commitment to address these challenges together with an ambitious plan of action to protect the environment for future generations. The recovery from the COVID-19 pandemic gives us the opportunity to build back better and greener together.”

The Minister of Environment of the Hashemite Kingdom of Jordan, Nabil Masarweh, said: “The Mediterranean region was shown to be one of the biggest climate change hotspots, where temperature in the region warms 20 % faster than the global mean temperature, as was indicated by the MedECC report, beside other environmental challenges that the region faces. Hence, we do not have the leisure of time, and we must collectively act fast. The Ministerial Declaration on Environment and Climate Action we adopted today forms excellent basis for action, based on transition towards inclusive, circular, resilient, and green economies. More mobilization of funds to south and south east countries is critical for fulfilling climate and environment actions and obligations”

The Secretary General of the Union for the Mediterranean Secretariat, Nasser Kamel, underlined how “Overall, the Mediterranean Sea is a fragile ecosystem that suffers from different ills such as biodiversity loss, overfishing, pollution, coastal degradation, and marine litter, among others. The alarming effects of climate change exacerbates the fragility of this ecosystem. The more closely the Euro-Mediterranean community works together, the more funding we will be able to generate and the more effectively we’ll be able to use it. The UfM has been very active in this regard, firstly by treating marine litter as an environmental and economic problem, and most importantly by mobilising funds targeting key regional operational initiatives to fight climate change.”

The 2030 GreenerMed Agenda provides a regional structured framework that, based on the coordination of existing and future programmes and projects, creates political and operational convergence to accelerate the transition of the Mediterranean region towards a green, circular and inclusive economy. The agenda is a living document and was built on the conclusions and results of the H2020 Initiative for a Cleaner Mediterranean, the SCP programmes and other relevant programmes; it is also linked to the Agenda 2030 and the Sustainable Development Goals.

The network of Mediterranean Experts on Climate and Environmental Change (MedECC) was created in 2015 as an open and independent international scientific expert network acting as a mechanism for decision-makers and the general public on the basis of available scientific information and on-going research. The construction of this network responds to several intentions of regional institutions, such as the UN Environment/MAP through the MSSD 2016-2015 and the Regional Framework for Climate Change Adaptation in the Mediterranean, and the Expert Group on Climate Change of the Union for the Mediterranean (UfM CCEG). MedECC includes more than 600 scientists from 35 countries. Its Secretariat is hosted by Plan Bleu in Marseille.

The UfM Secretariat is actively working with all its partners across the region to enhance women’s empowerment via specific region-wide projects and initiatives. Below some examples:

The Clima-Med project supports the transition of eight partner countries in the Southern Neighbourhood towards sustainable, low-carbon and climate-resilient development. The project supports countries in achieving their Nationally Determined Contributions, and has a specific focus on reinforcing the capacity of local administrations in climate action. The project – funded by the EU – was launched in June 2018 to be implemented over 48 months with a total budget of EUR 6,9 million. The target beneficiaries are governmental, local authorities and non-state actors in Algeria, Egypt, Israel, Jordan, Lebanon, Morocco, Palestine and Tunisia. By labelling Clima-Med, the UfM Secretariat contributed to expanding the awareness on the project and facilitate cooperation with key players to fund investments.

The overall goal of this project is to effectively tackle the issue of marine litter in the Mediterranean. It directly supports the implementation of the UNEP/MAP Regional Plan on Marine Litter Management in the Mediterranean. The project entails actions that address the whole management cycle of marine litter, from monitoring and assessment to prevention and mitigation, as well as actions to strengthen networking between and among authorities in pelagic and coastal areas.

The BlueMed Initiative, set up in May 2014 in the framework of the European Strategy on Blue Growth, is a political initiative aiming at advancing a shared vision for a more healthy, productive, resilient, better known and valued Mediterranean Sea, promoting the citizens’ social well-being and prosperity, now and for future generations, and boosting economic growth and jobs.

PRIMA – Partnership for Research and Innovation in the Mediterranean Area is the most ambitious joint programme to be undertaken in the frame of Euro-Mediterranean cooperation. By funding R&I through competitive calls, PRIMA aims to: build research and innovation capacities and to develop knowledge and common innovative solutions for agro-food systems, to make them sustainable, and for integrated water provision and management in the Mediterranean area, to make those systems and that provision and management more climate resilient, efficient, cost-effective and environmentally and socially sustainable, and to contribute to solving water scarcity, food security, nutrition, health, well-being and migration problems upstream. 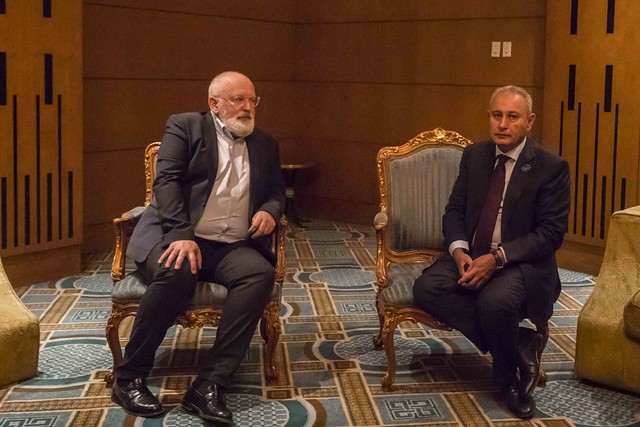