Overview of the Strategy for the Ministery for Women, Family Affairs and Children regarding Women Empowerment

The new Tunisian constitution of January 2014 shows positive signs in terms of the defence of women’s rights with two articles, in particular Articles 21 and 46 which rule on discrimination and equal opportunities in positions of responsibility, and gender-based violence. In addition, the vote of 26 July 2017 by the Assembly of the Representatives of the People (ARP) in favour of a law to combat violence against women shows further promising signs.

Nevertheless, and despite these advances, socioeconomic inequality in Tunisia still affects women.

• Since 2015, women represent 50.2% of the working-age population and 28.2% of the active population. The gap in average salary compared to men remains significant.

• Furthermore, the 2015 data show that the percentage of women occupying decision-making positions in civil service compared to the total number of civil servants is just 0.76%.

It is precisely to compensate for these inequalities that the Tunisian government in its Five-Year Plan has set a target participation rate of 35% for women in the labour market by 2020. On a social level, the Ministry for Women, Family Affairs and Children is working to ensure better childcare service coverage in the country (nurseries and kindergartens) to allow women to dedicate more time to paid work and to compensate for certain inequalities regarding access to funding, the Ministry has established a line of investment credit that is exclusively for women who have project ideas.

Nowadays, and with the adoption of a new comprehensive law addressing violence against women, Tunisia is reaffirming its commitment in respect of human rights and equal opportunities, and it calls upon the Union for the Mediterranean and its Member countries to strengthen regional cooperation, combine their efforts to address challenges, and consider women as valuable actors and as a solution to further sustainable development. 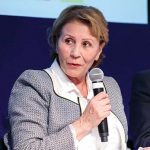 She was elected the first Secretary General of the Tunisian Organization for Education and Family, Executive Director for the Arab World at the Center for Environmental Education in the Mediterranean Region, and National Coordinator of the Network of Trainers for the development of women in the Mediterranean. Neziha LABIDI initiated a number of studies such as the study on “The distribution of the time budget between women and men” and the national strategy to combat violence against women. She has also had many contributions in regional and international bodies.