Promoted and fully financed by the European Union, CLIMA-MED seeks to enhance energy security and the adaptive capacity of partner countries while encouraging their transition to low-carbon and climate-resilient economies.

Identified as a climate change hotspot region, the numerous effects of climate change in the Mediterranean– including increasing water scarcity, rising temperatures and growing rates of desertification – are felt across borders in the region, affecting both socio-economic development and the geopolitical environment.

The overall objective of CLIMA-MED is to enhance the energy security and adaptive capacity of partner countries while fostering their transition to low-carbon and climate-resilient economies, thereby contributing to more stable, efficient, competitive and climate-resilient socio-economic communities, while at the same time increasing energy independence and reducing emissions. The project objective is in-line with and part of the “Energy security and Climate action in the Southern Neighbourhood 2017-2018” programme, which was adopted by the European Commission in 2017.

The project will be developed in coordination with other donors and bilateral EU programmes, as well as those being implemented directly at the national and local level. Working with relevant projects and programmes will be vital and will involve consultations with a wide range of initiatives, including those under the EU External Investment Plan. 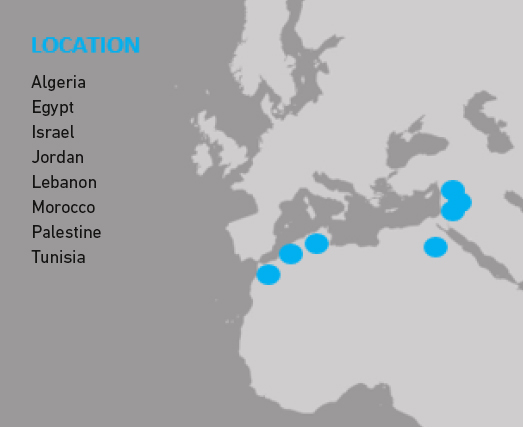 Promoted by the European Commission, the CLIMA-MED project is implemented by a Consortium led by Hulla & Co. Human Dynamics KG, with a total budget of € 6,9 million fully provided by the EU.

The project target beneficiaries are national and local authorities in ENI Southern countries: Algeria, Egypt, Israel, Jordan, Lebanon, Morocco, Palestine and Tunisia. The project will serve them through two offices, one in the Mashreq (Beirut, Lebanon) and one in the Maghreb region (Rabat, Morocco).

– Assist local authorities in the design, implementation and monitoring of SEACAPs in cooperation with National Authorities.
– Provide Helpdesk to the preparation of SEACAPs and act as the Covenant of Mayors in South Mediterranean (CoM Med).
– Ensure information dissemination and awareness-raising. 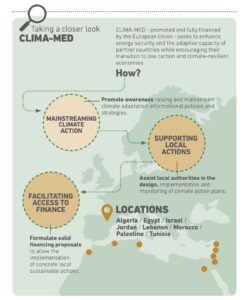