The “Desalination Facility for the Gaza Strip” Project

The construction of a 55 million cubic meters desalination facility (in the first phase) and a distribution system in the Gaza strip will help to address the major water deficit for a population of 2 million.

The “Desalination Facility for the Gaza strip” project is a landmark operation consisting of three integrated projects in the Gaza Strip: the construction of a 55 million cubic meters desalination Sea Water Reverse Osmosis (SWRO) plant; a North-South conveyance system; and a Non-Revenue Water reduction project. 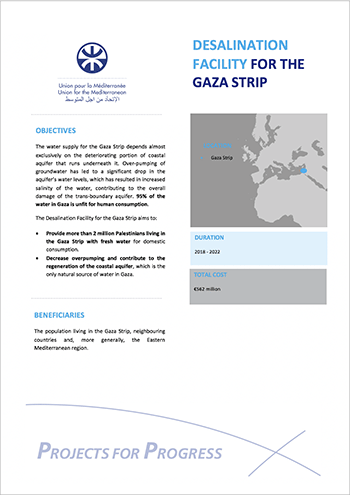 The project will help to address the major water deficit for an ever increasing population of currently 2 million people. The large-scale desalination facility is part of a broader Palestinian Water Programme in Gaza which aims at addressing the water crisis in the Gaza Strip, where 95% of the water is not drinkable due to the over-pumping of the Coastal Aquifer, the only available water source in the region.

The project will deliver an essential and concrete response to the needs of 2 million citizens living on the Southern shores of the Mediterranean. The project will also contribute to the reduction of the pollution in the Mediterranean, by preventing the Coastal Aquifer to collapse and to the political stability of the region by tackling the challenge of water scarcity.

The Desalination Facility for the Gaza Strip is a landmark operation consisting of three integrated projects in this territory:

The overall operation will foster job creation and future economic and sustainable development in this highly populated region.

Video of the plant 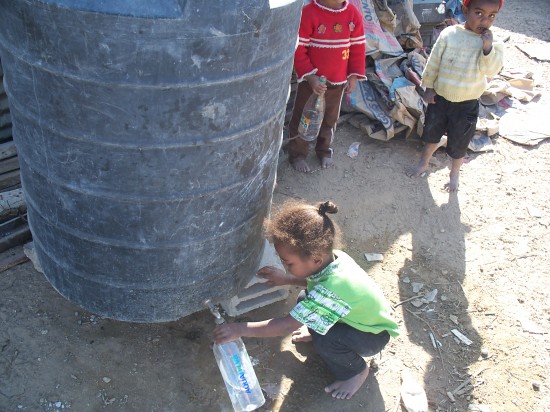 The Project is promoted by the Government of Palestine. The partners are the European Commission (EC), the European Investment Bank (EIB), the islamic Development Bank (IDB) and the World Bank (WB).