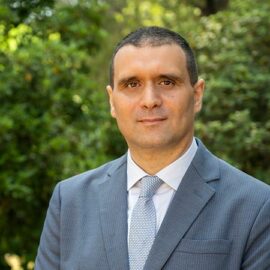 Dr. Abdelkader El Khissassi is the Deputy Secretary General of the Union for the Mediterranean (UfM), in charge of the Economic Development and Employment since July 2021.

He is a Moroccan Diplomat who was seconded to the UfM Secretariat in Barcelona, as Senior Advisor, responsible for the Youth and Civil Protection dossiers in the Social and Civil Affairs Division.

Besides serving abroad, he held the position of Political Advisor in charge of relationships with the European Institutions at the Ministry of Foreign Affairs, African Cooperation and Moroccan Expatriates of the Kingdom of Morocco in Rabat.

Dr. El Khissassi holds a Doctorate degree in Contemporary History of International Relations (Euro-Med Relations) from the University of Strasbourg and he is the author of “The challenges of the Euro-Mediterranean relations between the fall of the Berlin Wall and the setbacks of the Arab Spring” (2016). He has written several research papers and articles on international relations and economy, and he has other publications in fields of history and literature.