Barcelona, 11 October 2016 . The UfM Secretariat held on 10-11 October, 2016,  at its headquarters in Barcelona, the 3rd high-level conference on women’s empowerment “Women for the Mediterranean: Driving force for development and stability”.  The Conference witnessed the participation of high-level personalities such as the Minister of Social Development of Jordan, Wajeeh Azayzeh, the Minister of Women and Family Affairs of Tunisia, Néziha Labidi, the former vice-president of the Government of Spain and President of Mujeres por África, María Teresa Fernández de la Vega and the President of the National Council for Women of Egypt, Maya Morsi.  Engaged women from the civil society also participated, such as Inès Safi, Researcher at the Centre National de la Recherche Scientifique, Nabila Hamza, Member of the Civicus Gender Working Group Advisory Board, and Suzanne Jabbour, Restart Center Director and Member of the UN Subcommittee on Prevention of Torture from Lebanon.

In the framework of the active cooperation between the UfMS and the UfM Parliamentary Assembly, the Committee on Women’s Rights of the Parliamentary Assembly of the UfM also gathered in Barcelona on this occasion. The Conference was held in partnership with the Spanish Agency for International Development Cooperation (AECID) and the German agency for international development cooperation (GIZ).

Over the 2 days, the Conference provided a regional dialogue forum where the 250 participants from more than 30 countries stressed the need to invest in the essential contribution of women as a response to the current Mediterranean challenges, including inclusive growth, extremism and radicalisation as well as migration challenges.  The conference featured a wealth of exchanges of experiences, best practices and concrete initiatives.

The project is contributing to enhance women’s economic inclusion by harnessing the potential of women entrepreneurs in Algeria, Egypt, Jordan, Lebanon, Morocco, Palestine and Tunisia, and facilitating an inclusive policy dialogue to achieve an enabling environment for women’s entrepreneurship in the region. Endorsed by the UfM Member States in November 2015 with a total budget of €4.5M, the project is promoted by the United Nations Industrial Development Organization (UNIDO). Over 2,000 female entrepreneurs are expected to benefit from the project’s activities resulting in an estimated number of 500 promising business projects.

Preliminary findings from the UfM Regional Dialogue on Women’s Empowerment

The Conference was the occasion to discuss the preliminary findings from the “Regional Dialogue on women’s empowerment”, launched by the UfM Secretariat throughout 2015 and 2016.  This platform has gathered representatives from UfM governments, international experts on gender equality, as well as international and civil society organisations to review the current situation of women in the socio-economic life, the progress achieved since the Paris Ministerial commitments and prepare for the 2017 Ministerial Meeting, pushing forward a strong regional agenda on gender equality (read more here). 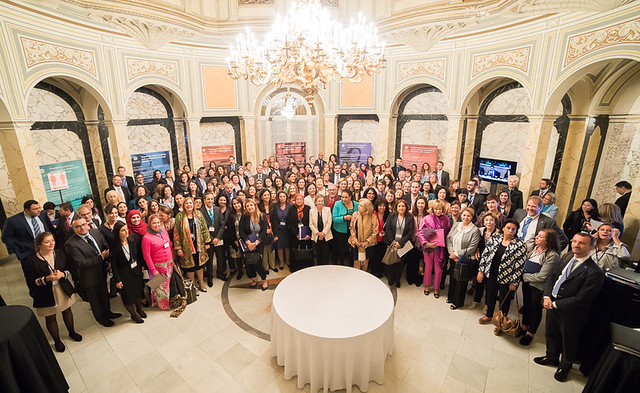 UfM Secretary General Fathallah Sijilmassi stated that: “Youth and women are catalysts for change, a source of innovation and an engine for growth. Equality between men and women is a vector for inclusive growth, democracy and stability in the Mediterranean region and this is why at the UfM we have placed women’s empowerment at the heart of our regional initiatives”.

” Women are the most influential players against the extremist discourse in the region and beyond “ said Wajih Azaizeh, Minister of Social Development of Jordan.

“It is essential to strengthen the strategies and common instruments between North and South to find sustainable and practical solutions to the challenges related to regional development, stability and security. This is the spirit of our regional dialogue and the approach of the Union for the Mediterranean”, stated Delphine Borione, UfM Senior Deputy Secretary General.

Up to October 2016, UfM activities have already reached direct tangible impact with a potential of growing further, in particular on youth employability, inclusive growth and women’s empowerment: 25 projects with impact on close to 200,000 individuals. Out of these 25 cooperation projects, the UfM-led Mediterranean Initiative for Jobs (Med4Jobs) has currently 12 projects running in the Southern and Northern shores of the Mediterranean, targeting over 100,000 young job seekers and entrepreneurs, and supporting the development of over 1,000 small and medium-sized companies.

There is a growing evidence of the link between women’s empowerment and a significant impact in higher rates of education, increased economic growth, social cohesion, leading to more stability, peace and development. By promoting an equal participation of women in the labour market and in public life, the GDP could increase by an estimated $28 trillion or 26%, by 2025 (Source: McKinsey Global Institute).