• A delegation from the UfM Secretariat exchanged views with EU Commissioners and Parliamentarians in Strasbourg on the margin of the plenary session regarding the key role of the UfM in the ongoing European Neighbourghood Policy (ENP) review.

Strasbourg, 12 February 2015. A high-level delegation from the UfM Secretariat, led by its Secretary General Fathallah Sijilmassi, held talks with EU parliamentarians and EU Commissioners on the margin of the plenary session of the European Parliament in Strasbourg to reinforce Euro-Mediterranean regional cooperation.

After the meeting on Tuesday with Federica Mogherini, High Representative of the EU Foreign Affairs and Vice-President of the EU Commission, Secretary General Sijilmassi held talks yesterday with Johannes Hahn, EU Commissioner for European Neighbourhood Policy and Enlargement Negotiations, and Cecilia Malmstrom, EU Commissioner for Trade. He presented the main achievements of the Secretariat and highlighted the organisation’s prospective work. They further discussed the key role of the UFM within the framework of the ENP review, as well as existing challenges and opportunities in the Euro-Mediterranean cooperation. 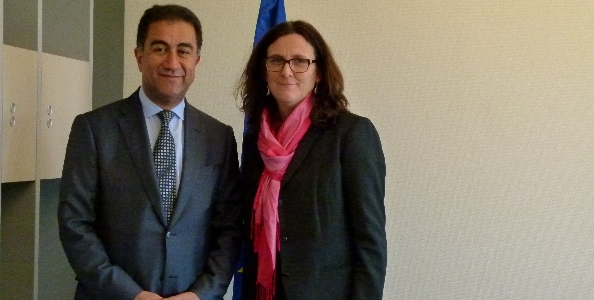 The ongoing review process of the European Neighbourhood Policy (ENP), along with the celebration of the 20th anniversary of the Barcelona Process this year, provides an opportunity to further enhance the role of the Union for the Mediterranean as a key institution for inclusive dialogue and regional platform in order to deal with existing challenges and opportunities the region.