Adoption of the UfM Youth Strategy 2030: Euro-Mediterranean Youth towards a common goal

Barcelona, 9 December 2021. During the last meeting of the UfM Senior Officials for 2021, and just ahead of the 2022 European Year of Youth, the 42 member states adopted unanimously the UfM Youth Strategy 2030 – Euro-Mediterranean Youth towards a common goal.

The Euro-Mediterranean region has one of the youngest populations in the world, with one in every three people being younger than 25 years old, and with this number reaching almost half of the population for the Southern and Eastern Mediterranean countries.

Moreover, youth are among the most vulnerable groups in the face of the pressing challenges our Mare Nostrum has been facing in the last decades, mainly the issues of unemployment and gender equality, which have been exacerbated with the Covid-19 pandemic, but also migration, radicalization and violent extremism. Climate change and sustainable development represent also major challenges for the new generations, as the future of the region is at stake.

Nevertheless, the daily achievements of millions of Mediterranean young people continue to be remarkable. Youth should therefore be given prominence in policy-making across Euro-Mediterranean countries; not only as objects of these policies but as partners in the discussions and full actors in the promotion of inclusive and sustainable development in the region. 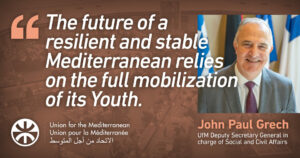 In this sense, the Union for the Mediterranean (UfM) has placed young people at the heart of its action, focusing on empowering and engaging them as agents for positive change. The UfM Youth Strategy 2030 is a milestone that comes as a targeted response to the call of the 42 UfM Ministers of Foreign Affairs, at the 2nd UfM Regional Forum, to launch a ‘Positive Agenda for Youth in the Mediterranean´.

In line with that mandate, the UfM Secretariat has been mobilizing youth-led organisations and regional stakeholders working on youth empowerment, to work to support and mobilize youth, in a more structured way, across its main areas of action. It has identified the needs and main lines of action to reinforce regional cooperation on youth and speed up the implementation of related Sustainable Development Goals in the region.

“The ultimate success of the UfM 2030 Youth Strategy, and the Action Plan that will follow, depends on the degree of ownership and cooperation which all UfM member states and interested stakeholders, invest in it”, added UfM Deputy Secretary General John Paul Grech.

The UfM Senior Official’s Meeting also saw the UfM endorsement of the Euro-Med Governance: Euro-MED 2021-2027 Governance projects and capitalization of the Interreg MED 2014-2020 governance approach and projects. These Interreg Med frameworks aim at the improvement of territorial transnational governance through an evidence-based dialogue among national and regional actors.