Unleashing the Potential of Euro-Mediterranean Cooperation: Ten Years of Action-Oriented Agenda within the UfM

Published by Friends of Europe

More than 10 years have passed since the 2008 Paris Declaration, which gave a new impetus to the Euro-Mediterranean Partnership. Building upon a shared vision of the region as one of peace and stability, the Union for the Mediterranean (UfM) has made both remarkable and inspiring strides. Such accomplishments would not have been possible without the pragmatic, yet ambitious, approach that the co-presidency and the Secretariat have maintained over the past few years.

The adoption of the UfM Roadmap by Member States in 2017 helped drive a positive action-driven agenda and a reinvigorated sense of direction. The UfM Secretariat has been actively engaged in coordinating efforts with its Member States and relevant actors in the Euro-Mediterranean region through a collective, multi-stakeholder approach to promote regional cooperation and integration.

These participants are aware of the huge potential of the Mediterranean region given its economic and geostrategic importance. With its young population and the wealth of natural – as well as human – capital, the economic weight of the region cannot be underestimated: approximately one-third of the world’s total merchant shipping crosses the Mediterranean and the annual GDP for the UfM region surpasses that of the US and China.

Despite these clear advantages, several challenges hindered UfM endeavours to reap the full potential of regional cooperation. The main obstacle has been the volatile regional context, coupled with other inherent Mediterranean challenges such as environmental degradation, elevated unemployment rates, socio-economic disparities, irregular migration, extremism and an unprecedented refugee crisis. While such challenges have undoubtedly stalled regional cooperation, the UfM was able to endure and move forward with its mission towards building consensus and enhancing regional cooperation.

10 years after its launch, the UfM remains true to its purpose of promoting regional cooperation and integration. It has moved forward by consolidating its organisational capacities, the revamping of its project labelling process and the expansion of its operational ecosystem. UfM cooperation reached new milestones during 2018, particularly in promoting ambitious regional agendas for water and women’s empowerment. This was made possible by the organisation’s 2017 Cairo Declaration which led to an unprecedented mechanism to review the implementation of commitments on promoting gender equality while providing concrete recommendations and factual progress reports to stakeholders and policymakers.

Regional cooperation on civil protection has also recently resumed under the umbrella of the UfM following a nine-year hiatus. Furthermore, the recent Ministerial meeting on employment marked a key regional effort in calling, not only for coordinated efforts and more effective policy reforms, but also for integrated approaches that emphasise youth employability, women’s socio-economic empowerment, the promotion of social dialogue, as well as skills and job matching, just to name a few. Success in UfM efforts in these policy fields can be partially attributed to the conviction that regional cooperation is not a choice but, rather, a mutually beneficial necessity.

The UfM did not come to life ex-nihilo. It would be impossible to imagine a Euro-Mediterranean region without a platform as dynamic and meaningful. The UfM is more than just an expression of the common political will of both shores of the Mediterranean. It is an organisation with a unique institutional architecture and an action-oriented methodology capable of delivering concrete projects, programmes and initiatives with tangible impact on the ground. It would not be an exaggeration to state that if the UfM did not exist, there would be a dire need for its creation, particularly in such a regional context.

The support that the UfM receives from its co-presidency and Member States highlights a continuation of a shared vision towards genuine and constructive regional cooperation and inspires hope in what is yet to come. Nonetheless, while there are several developments and success stories that inspire optimism, the UfM remain far from achieving its mission in a way that corresponds to its ambitions. The path remains long, arduous and requires further diligent efforts, as well as a renewed commitment to cooperation.

Unilateralism is no longer feasible in a globalised world that has grown more connected than ever, and a regional setting that is becoming increasingly characterised by cross-border challenges that far exceed the capacity of solitary undertakings. In this regard, the UfM Secretariat will proceed with its positive agenda and its pragmatic approach to fulfil the aspirations of our peoples while working hand-in-hand with partners for a better future as cooperation and multilateralism have now become more indispensable than ever.

Nasser Kamel is the Secretary General of the Union for the Mediterranean. 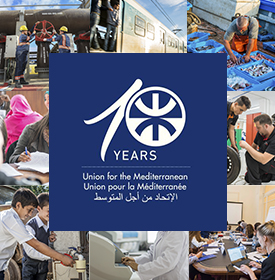