Egypt has long been recognized as an effective player in the promotion of cooperation between the two shores of the Mediterranean prior to the launch of the Union for the Mediterranean (UfM). As one of its main founders, Egypt paved the way for possible cooperation among countries with the vision of achieving developmental and societal welfare, which would – in turn – lead to the transformation of the area of this sea to one that is peaceful, prosperous and secure. Regional frameworks and the UfM play an important role in strengthening the role of women in societies to ensure progress towards the achievement of the sustainable development goals (SDGs), and in particular goal 5 -Achieve gender equality and empower all women and girlsby sharing and offering innovative solutions that would break the glass ceiling for women in the region. Egypt managed to break the glass-ceiling for women’s representation in elected and decision making bodies.

In two historic precedents, two women were the first ever to hold the position of Advisor to the President on National Security and the position of Governor, respectively, paving the way for many more women to fulfil similar aspirations. Women parliamentarians comprise 15% of the current parliamentary seats, which is regarded as a major breakthrough and the highest record in modern Egyptian history.

Additionally, four women cabinet ministers hold key ministries, and 80 famale judges were appointed over the past years, making it possible for the public to recognize and evaluate the capacities of women. Following the adoption of the 2014 Constitution, which includes more than 20 provisions that guarantee the rights of women and support their empowerment, the Egyptian President Abdel Fattah Al Sisi – in a historical precedent – announced 2017 as the “Year of Egyptian Women,” describing expediting steps towards the empowerment of women, in addition to safeguarding their constitutional rights as a “national duty.” In a demonstration of Egypt’s strong political will and commitment to the achievement of gender equality and the empowerment of women, the President of Egypt further announced his endorsement of the first “National Women’s Strategy 2030” globally to achieve the SDGs.

[ufm_quote]”The Secret of Your Power” breaks the glass ceiling for women and presents the unconventional roles that women can play.”[/ufm_quote]

The Egyptian President further called upon the National Council for Women in Egypt (NCW), the Government of Egypt, and all national institutions to regard the National Women’s Strategy 2030 as the reference document that guides the upcoming work on the SDGs, besides implementing all plans, programmes, and projects reflected in the strategy. He further affirmed the proposal to establish a special observatory to follow up on its implementation.

The National Women’s Strategy 2030 is comprised of four main pillars; the first is women’s political empowerment and leadership; the second is women’s economic empowerment; the third is social empowerment; and fourth is protection. It is devised to enact women’s constitutional rights that foster principles of equality and nondiscrimination, equal opportunity, and protection. It is not a standalone strategy for gender equality and women’s rights advocates, but rather a roadmap for the Egyptian society at large, especially men, youth, and all state institutions. To ensure that the objectives of the strategy will be met, NCW established an observatory that will follow up on its implementation through the rigorous application of monitoring and evaluation mechanisms, including the establishment of baselines and indicators to measure ongoing progress.

Cognizant of the importance of women’s participation at all levels, the National Council for Women (NCW) launched the first nationwide campaign on Women’s Empowerment. Launched globally at the Commission on the Status of Women at the United Nations in New York and a recipient of the “Cristal (Gold Equivalent)” award in the Arab Culture section in Corporate Communication Effectiveness. “The Secret of Your Power” breaks the glass ceiling for women and presents the unconventional roles that women can play. It is positioned as the 100 million behavioural and ideational campaign, following its massive success with over 100 celebrities and public figures endorsing it, besides its consideration for regional and global awards.

To ensure that all women, including the marginalized and those living in rural and remote areas are not left behind, the NCW designed an innovative awareness raising methodology which was named after the practice of the actual knocking on the doors of all women in Egyptian districts and villages. The “Knocking Door Campaigns” cover Egypt’s 27 governorates, reaching out to women and their families to raise their awareness about various topics that relate to the empowerment of women and the added value of their participation at all levels. Through the Knocking Door Campaigns, women also learn about the various government services provided, including legal and economic support. The methodology has successfully reached out to 1,100,000 women across Egypt who are able to exchange views about their needs and aspirations and who have become aware about their different rights and responsibilities.

In response to the unprecedented wave of terrorism and extremism around the world, more than 7000 women gathered across all Egyptian governorates – including representatives of civil society organizations – to announce a statement that expresses their commitment and support to national, regional, and international efforts to prevent terrorism and extremism. Political leaders and institutions in Egypt recognize that women can be powerful preventers and participate in innovative efforts to inform, shape, and implement policies and programs to mitigate the effect of terrorism and extremism. Women are the custodians of cultural, social, and religious values, and are uniquely positioned to transmit these ideals to the next generation. I am confident that the UfM Ministerial Conference on strengthening the role of women in society (Cairo, Egypt- 27 November 2017) and its action oriented Ministerial Declaration will take the EuroMediterranean cooperation in the field of women empowerment a leap forward. 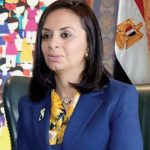 Maya Morsi took office as President of Egypt’s National Council for Women (NCW) on 1 February 2016. In 2016, Dr. Morsy launched the first nationwide campaign on Women’s Empowerment “Taa Marboota: The secret of your power” with the aim of utilizing the power of media and communications to address misconceptions and redefine gender roles. Prior to joining the NCW, Maya Morsi had served, since 2013, as Regional Advisor on Gender Policies and Programmes in the United Nations Development Programme’s (UNDP) Regional Centre for Arab States in Cairo. She was responsible for providing policy advice for women’s empowerment and gender mainstreaming.

Maya Morsi’s career spans more than twenty years of dedicated service to the advancement of women and defending their fundamental rights. She served as Head of the Egypt Country Office of the United Nations Fund for Women – UNIFEM (2000-2013); UNIFEM Project Coordinator (1999-2000); Consultant for the Girls Education and Empowerment Project of the Ministry of Education in Egypt (1998-1999); and Project Officer in the Sustainable Human Development Platform for Action and Monitoring (1995-1998).