Young women as job creators: the UfM prepares to launch the second phase of the project to promote women entrepreneurship

Barcelona, 15 January 2013. A Global Project Memorandum between the Union for the Mediterranean and the Association of Organisations of Mediterranean Businesswomen (AFAEMME) was signed today at the headquarters of the Union for the Mediterranean in Barcelona. The document was signed following the recent successful implementation of the first phase of the UfM-labelled project Young Women as Job Creators, promoted and implemented by AFAEMME and supported by the Norwegian Government, the Spanish private company Gas Natural Fenosa and the European Investment Bank (EIB). Both sides have firmly committed to ensuring the project’s replication in additional countries and universities in the Euro-Mediterranean region in an effort to further promote women entrepreneurship and contribute to the development of sustainable economies based on private initiative, quality education and gender equality.

The project’s first phase was successfully rolled out between May and November 2013 in Morocco, Palestine, Jordan and Spain. 18 Women Entrepreneurship Days (WEDs), a series of seminars providing participants with specific training and coaching to create new businesses, were held in cooperation with a total of 32 local universities, higher education centres, schools and national businesswomen’s organisations. The WEDs brought together approximately 800 male and female university students, providing them with free advice on how to create a new business and motivating them to pursue entrepreneurial careers. The WEDs focused specifically on informing participants on the basic legal and business issues involved in setting up a new company and on analysing their business plans. Throughout the project, emphasis has been placed on the role and importance of women as entrepreneurs and job creators for the development of national economies. The participants’ reactions were overwhelmingly positive, stating that the project gave them an opportunity to express and explore their professional aspirations and boosted their confidence and determination to pursue their entrepreneurial careers.

The second phase of the project, set to be launched in 2014, will be held in seven countries, with Egypt, Tunisia and Albania joining the four initial countries from the first phase. The third phase is planned for 2015 and will encompass the seven countries which participated in the project’s first and second phases as well as Algeria, Croatia, Lebanon and Turkey. Once all three phases have been completed in 2015, a total of 11 countries will have participated in the project. 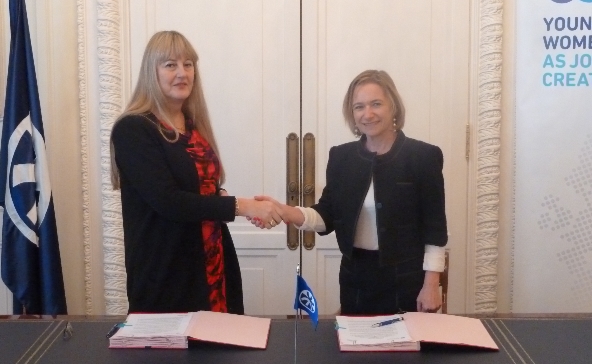