29 November 2021. Held in the framework of the celebrations of the Day of the Mediterranean, unanimously endorsed by all UfM Member States last year, the 6th Union for the Mediterranean (UfM) Regional Forum took place today in Barcelona. During the meeting, the UfM Foreign Affairs Ministers agreed on the need to further intensify regional integration and cooperation.

The meeting was an opportunity to share an overview of the progress made since the adoption of the UfM Roadmap for Action in 2017, and within the priorities decided last year, in 5 areas of action where the UfM can play a crucial role towards an inclusive and sustainable post-pandemic recovery, namely Environmental and climate action, Sustainable and inclusive economic and human development, Social inclusiveness and equality, Digital transformation and not least civil protection.  The meeting was also a chance to acknowledge the three interlinked UfM Ministerial declarations on Blue Economy, Energy as well as Environment and Climate Action, unanimously endorsed by all UfM Member States this year. Since 2017, the political dialogue within the UfM has been consistently enhanced, with four UfM Regional Fora at the level of Foreign Affairs Ministers and nine UfM Sectorial Ministerial Meetings endorsing ambitious declarations in key sectoral areas, from water to women’s empowerment. Likewise, more than 400 Experts fora and UfM Working Groups, involving at least 30.000 key stakeholders from the region, have also facilitated policymaking and the implementation of more than 50 cooperation projects across the region.

As part of the 6th UfM Regional Forum, the UfM Secretariat hosted a conference to present and discuss the main results of the first comprehensive report on the state of play of the Euro-Mediterranean integration. Commissioned by the UfM and developed by the OECD, the report analyses five domains – trade, finance, infrastructure, the movement of people, and research and higher education – presenting key findings, clear indicators to track future progress, and policy recommendations for each of these areas.

UfM Secretary General, Nasser Kamel: “As we work to recover from the pandemic, we have a unique opportunity to challenge our beliefs and embrace the potential of the region. The unprecedent high-level attendance at this year’s Regional Forum is a perfect example of the UfM Member States coming together, bound by their common determination for a strong Euro-Mediterranean cooperation to build an inclusive and sustainable recovery for all. Women and Youth, who are among the most affected by the consequences of the pandemic, will continued to be at the core of the UfM response.”

In the morning of the Forum, a new agreement was signed between the UNDP and the Union for the Mediterranean, to work together in the field of Climate action, economic integration and support for women and youth.

Regional Integration report
This Report, a mandate tasked by the UfM Member States to the UfM Secretariat, was developed by the Organisation for Economic Co-operation and Development (OECD) with the financial support of the Deutsche Gesellschaft für Internationale Zusammenarbeit GmbH (GIZ) on behalf of the Federal Ministry for Economic Cooperation and Development of Germany (BMZ).
Mediterranean Day 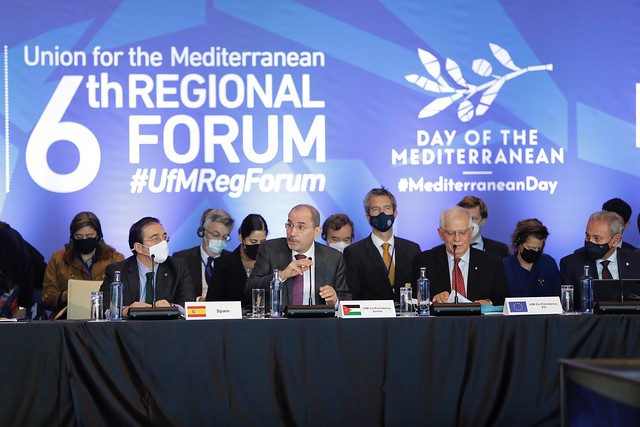