Barcelona, 24 November 2022. Held in the framework of the celebrations of the Day of the Mediterranean, unanimously endorsed by all UfM Member States in 2020, the 7th Union for the Mediterranean (UfM) Regional Forum took place today in Barcelona. During the meeting, the UfM Foreign Affairs Ministers agreed on the need to further intensify regional cooperation and integration to face the high unemployment rates, the climate emergency and the imbalanced growth in a disintegrated region – all which the war in Ukraine has ultimately deteriorated. UfM Foreign Affairs Ministers endorsed a ministerial declaration on the accession of North Macedonia to the Union for the Mediterranean and welcomed the new Member State to the organization.

The UfM Regional Forum was co-chaired by the High Representative of the EU for Foreign Affairs and Security Policy and Vice-President of the European Commission, Josep Borrell, and by the Minister of Foreign Affairs and Expatriates of Jordan, Ayman Safadi, hosted by the Minister of Foreign Affairs, European Union and Cooperation of Spain, José Manuel Albares, and in the presence of the Secretary General of the UfM, Nasser Kamel. A European Union-Southern Neighbourhood Ministerial Meeting also took place in Barcelona, back-to-back with the UfM Regional Forum meeting.

The Forum also hosted a Euro-Mediterranean youth meeting organised by the UfM Secretariat and the Anna Lindh Foundation. The young people, coming from civil society organizations from across the Mediterranean, presented their aspirations and proposals to the foreign ministers in order to develop concrete solutions for enhanced sustainability, prosperity and integration in the region. More than 200 young civil society representatives from 20 countries had worked on these proposals throughout 2021 and 2022.

UfM Secretary General, Nasser Kamel, said: “As we work to recover from the pandemic and the impact of the Ukrainian war in our region, we have a unique opportunity to leverage the potential of the region. The high-level attendance at this year’s Regional Forum and the adhesion of North Macedonia as a new Member State reflects the UfM countries’ commitment for a stronger regional cooperation. Women and youth are among the most affected by the consequences of the regional crises, and we are particularly pleased to give youth more opportunities to meet with their policy makers and have a voice in the Euro-Mediterranean institutions”.

The meeting was also an opportunity to share an overview of the progress made since the adoption of the five priorities of action agreed on the occasion of the 25th anniversary of the Barcelona Process in 2020, namely environmental and climate action, sustainable and inclusive economic and human development, social inclusiveness and equality, digital transformation, and civil protection.

On the sidelines of the Regional Forum, the European Commission and the European Investment Bank jointly launched the ‘AFR-IX Medusa Submarine Cable System’ initiative, a digital connectivity project that aims to interconnect the Northern and Southern shores of the Mediterranean via the most recent and techno logically advanced fibre optics submarine cable.

Additionally, the UfM and the League of Arab States will sign this afternoon a Memorandum of Understanding (UfM) to establish a framework for cooperation in the areas of Climate Change, Energy, Water and Environment, Blue and Green Economy; Economic Development, Economic Integration and Employment; Social and Civil Affairs. 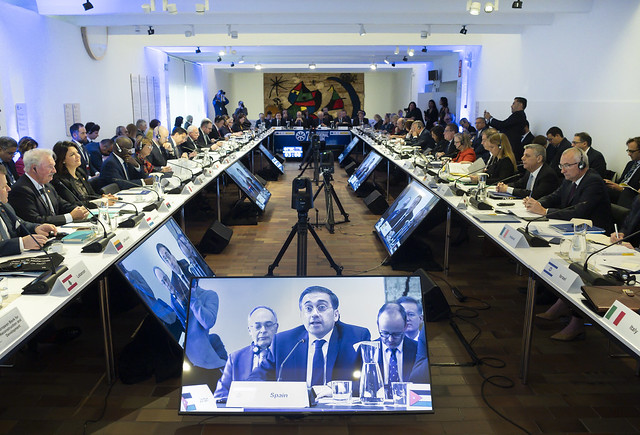