International Day for the Elimination of Violence Against Women: The UfM calls for urgent action to safeguard women’s rights

Barcelona, 25 November 2020. According to recent data (UN Women, 2020), 243 Million women and girls aged 15-49 have been subjected to sexual and/or physical violence worldwide by an intimate partner in the previous 12 months. Rooted in structural gender inequalities, violence against women and girls (VAWG) is a violation of human rights and a form of gender-based discrimination. Estimates of the scale of the problem are alarming. Such violence has a major and long-lasting impact on victims and imposes a significant cost burden on society.

On top of that, VAWG tends to increase during every type of emergency, including epidemics. The COVID-19 crisis has exposed and exacerbated existing inequalities. Its consequences and effects will surely unfold in the years ahead; posing an even higher risk to the most vulnerable. Emerging evidence confirms that the impacts of crises are never gender neutral, and COVID-19 is no exception. The pandemic has revealed the weaknesses of our health systems, bringing to the foreground the relation between the Pandemic and a surge in VAWG.

Across the UfM member states, lockdown measures were implemented to prevent the spread of COVID-19. Yet, these health measures trapped many women and girls at home with their abusers. Several countries have seen a rise in domestic violence reports. In France, reports of domestic violence increased by 30%. In Tunisia, calls to a helpline in the first days of confinement rose fivefold.  In Cyprus, helplines registered an increase in calls of 30%. Other countries, such as Italy, saw a decrease in gender-based violence reports, which suggests that some women may face barriers to reporting violence or seeking help.

Following the premise of the International Day for the Elimination of Violence Against Women, the UfM wants to raise awareness of the fact that women around the world are subject to rape, domestic violence , psychological abuse and other forms of violence and highlight that the scale and nature of the real issue still remains invisible. This date serves as a remainder of the importance of collaboration and cooperation, of sharing good practices and working together to eliminate gender-based violence.

The25th Anniversary of the Beijing Declaration and Platform of Action, the Istanbul Convention, or the Violence and Harassment Convention, are important tools in the right direction to prevent and combat all forms of violence against women.

Since its inception, the UfM has put gender equality and the challenge of ending VAWG at the centre of its agenda.  More concretely, combatting VAWG is one of the UfM’s four priorities areas of action and focus, notably endorsed at the political level at the UfM 2017 Cairo Ministerial Declaration on Strengthening the Role of Women in Society. This commitment has been materialized over the years through the UfM’s  methodology of political fora, dialogue platforms and regional projects. In this line, last week the UfM hosted its Women4Mediterranean Online High-Level Conference, which focused on the impact of the COVID-19 crisis on women and girls. One of the thematic focuses of the conference was on VAWG during times of crisis. In this context, high-level speakers from the public and private sector, as well as intern 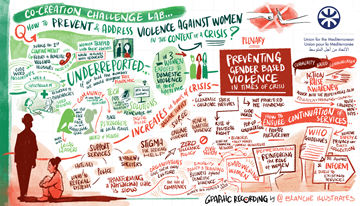 tional organizations and civil society, gathered to discuss and work together to prevent gender-based violence in times of crisis.

Additionally, the UfM has recently labelled a WHO project that focuses on gender-based violence and the health sector. This project aims to contribute to the commitments of the UfM Cairo

Ministerial declaration by improving countries’ capacities in preventing and responding to VAW as a key public health, gender equality and development issue.  It seeks to provide data, evidence and advocacy tools to governments and other stakeholders in 12 selected Euro-Mediterranean countries on the public health impact of violence against women.

Overall, progress towards ending gender violence has been too slow and not enough. Amid a global pandemic, and entering the second wave, it is urgent to address the impact that COVID-19 has had on women and girls to make sure that it does not result in a regression in the fight for gender equality and women’s empowerment. The convening of events like the Women4Conference, or by operationalising projects like the labeled WHO project, show a strong commitment by the UfM countries, international organisations and stakeholders to address the issue.

As an inter-governmental organization, the UfM is not only committed to safeguard women’s rights and gender equality but is determined to synergise its efforts on a regional level with policy makers, international organisations, stakeholders and civil society to achieve this goal. Combating gender-based violence on national and regional levels is to remain the key priority in gender equality strategies and implementations. Fighting to eradicate gender-based violence is fighting for human rights.