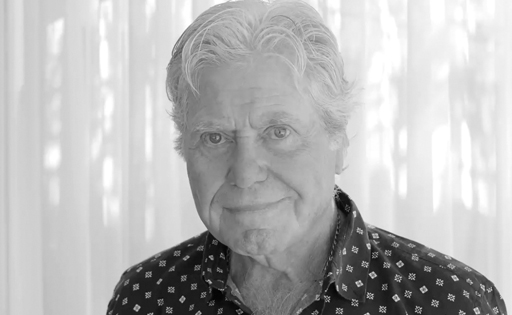 A serene Mediterranean
way of life

Hussein Fahmy is self-confident, an intellectual and a humanitarian soul. These characteristics drove his life and his career. At 80 years old, the Egyptian actor and director has played in more than a hundred films and directed countless others. He still uses his celebrity to shine a light on humanitarian issues in the Middle East and Northern Africa.

If you speak of Hussein Fahmy in his native Egypt, everyone knows his name. After some 60 years in the film industry, the actor-director has achieved the ease and comfort of someone who feels home in front of a camera. This experience and dexterity, the star decided early on to use it for good. He was a UN ambassador for Goodwill for more than a decade and now proudly is a global ambassador for the Special Olympics in the Middle East. “When I talk, people listen to me, when an official talks, they sound like they’re talking for the government”, he laughs.

It’s not only through humanitarian work that Fahmy disseminates his ideas and beliefs. Along the years, many issues rang true with him. He then made it a point to bring those themes into his professional projects. “In the movies I play, I always look for an important theme. It’s a theme that has to do with society”. His goal is to connect with his audience, with what makes them happy or sad. “I always believed that art and culture and the way we approach them can help us a lot in dismissing stereotypes out of people’s mind”. By choosing to depict various characters, cultures and countries in his movies, the actor made a conscious choice to open the audience’s mind to new horizons, hoping this would help bring people closer together “Motion pictures travel around the globe. We are introduced to other cultures and this is one way to erase harmful stereotypes”. For the movie star, a film doesn’t need to fix the problem but simply to depict it and make the viewer aware of it. That is the first step to solving global issues.

One theme Fahmy has always been driven to, is the representation of disabled people. “I don’t believe that people are disabled, I think that everyone is able in their own way”. This belief, the Egyptian actor communicates it through his work as global ambassador for the Special Olympics. Better integrating disabled people into our society became a priority. “A lot of healthy people look physically healthy, but they are more disabled than people who are mentally or physically disabled”. Fahmy doesn’t want to let stereotypes and prejudice stop people from living peacefully together.

Fahmy’s whole life has been deeply rooted into Egypt, the country where generations of his ancestors come from “My identity is Egyptian, definitely. My father and mother are Egyptians. Their parents were Egyptians. Their grandparents were too. All my family is Egyptian”.  The importance of Fahmy’s family and of his education is deeply felt in his personality, he is proud of it… “we were brought up in a house that was full of affection, full of love. Full of interest in bringing up qualified children. My parents had encyclopaedias at home. Whenever I asked a question, the answer was in the encyclopaedia.” Generations of men before him were involved in Egyptian politics, which Fahmy points as being the root of his interest for political topics you see reflected in his movies. “I lived in a house full of politics. At the age of 10 my parents used to have me sitting among them listening to what they were talking about. And I was listening to what was happening in the world. It was a very active life that I felt I was in the midst of. It has definitely developed my character.”

His childhood and upbringing which he describes as liberal and intellectual seem to have forged his character. Travelling quickly became a trend for the movie star, from family trips to Europe to film promotions around the globe. This made the director aware of the power of humanity. It became his goal to prove to his audience that coming from different countries doesn’t mean people can’t get along and live together peacefully.

After decades in the industry, the actor and director doesn’t seem ready to retire, although getting new exciting parts might get tricky after taking part in more than a hundred films “If I need to choose a new part to play, it needs to be new. If the part is similar to something I have done before, I won’t like it. The further away the part is from my personality, the better. If it’s too close to my character, why play it?”.