WOMED: The Next Generation of Leaders

The WoMED – Women of the Mediterranean: Next Generation of Leaders project targeted women aged 25-35 from Southern Mediterranean countries. It aimed to strengthen their professional and personal skills through an intensive training programme that looked at issues of gender equality.

The project also sought to develop a Euro-Mediterranean network for the promotion of gender equality. For three successive years, 66 women from Algeria, Egypt, Jordan, Lebanon, Libya, Morocco, Palestine, Syria, Turkey and Tunisia pursued a two-week intensive training programme on leadership and gender equality. The programme had a two-fold objective: to disseminate principles of gender equality in the Mediterranean region and to teach participants how to be part of a lively network of leading women. The training programme adopted a comprehensive, multidisciplinary approach to gender issues.

The WoMED project was labelled by UfM Member States on 24 May 2015 in Amman. It contributed to the implementation of the UfM Ministerial Declarations on Strengthening the Role of Women in Society and was part of the UfM Secretariat’s strategy to promote projects for female empowerment and gender equality in the Euro-Mediterranean region. 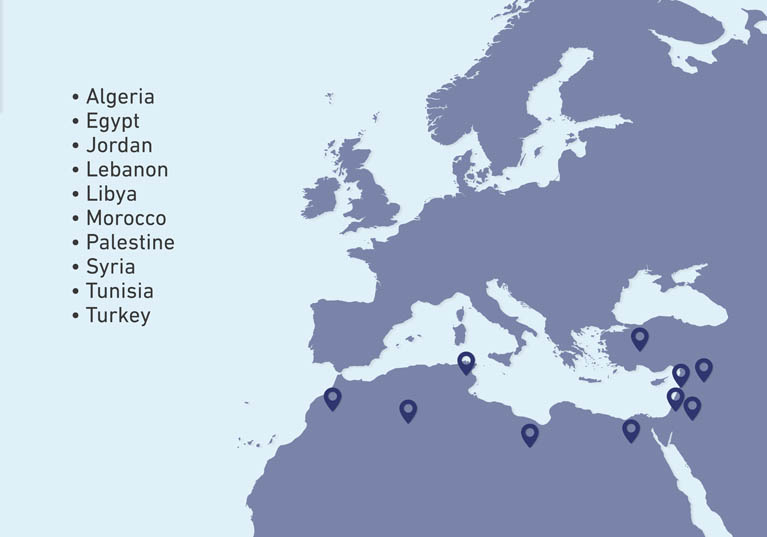 The project was promoted by Sciences Po Paris, an international research university located in Paris.

66 women (22 per year) from Southern Mediterranean countries, aged between 25 and 35. They were selected based on excellence in their respective sectors and their ambition to bring equality to their field of work. The beneficiaries all had a clear interest in issues relating to transparency, good governance and the defence of women’s rights.

Masterclasses on competency building, covering subjects such as leadership, management, and conflict and resistance management.

A visit to Brussels to meet lobbyists and members of the European Parliament, the Parliamentary Assembly of the UfM, and other institutions.

66 young women attained personal and professional advancement in their area of work and helped build a network of alumni that expanded year after year.

The project promoted a culture of gender equality in the countries involved.

Zoom on WOMED: the next generation of leaders

The story of Lina Khalifeh: Empowering Women Through Self-Defence

A former student of the WoMED project, Lina Khalifeh, a Jordanian who has a black belt in Taekwondo, founded SheFighter in 2010, the first self-defence studio of its kind in the Middle East. She is eager to have an impact on a million women in the Middle East and up until now, 12 000 women have benefited from her training. Over the past several years, she has received many distinctions, including winning the Gold award at the United Nations Women in Business Awards.