Tackling the climate crisis: how local actions are confronting a global challenge

Read the stories of three local champions in the fight against climate change, in the framework of the UfM-supported project Clima-Med.

31 July 2020. Born and raised in Beirut, Marwan Kaiss is the Mayor of the Batloun Municipality in the Chouf area, 45km inland from Lebanon’s bustling capital city. Passionate about preparing Lebanon for the future, he returned to university at 53 years old and completed his Masters at the age of 60 and was then elected to his current position. Despite challenging circumstances, much of his time in public office has been at the forefront of a burgeoning local movement to fight climate change and prioritise a green agenda.

In Lebanon, the impact of environmental degradation is equivalent to 3.4% of GDP.

For Marwan, even as a child, the impact of pollution on the Lebanese countryside versus urban Beirut was stark. However, throughout his life he has seen significant progress in Lebanon’s appetite and ability to tackle climate change.

“It’s the local authorities who are starting to do things on a small scale, and hopefully it will be replicated on a bigger scale … the change has to come from the bottom up” says Marwan Kaiss, Mayor of the Batloun Municipality

Indeed, this collective grassroots approach has successfully reduced Batloun municipality’s solid waste output by half in just two years. Lebanon has been suffering with an important build-up of waste since 2015, contributing to associated health problems. However, despite Batloun’s remarkable achievement in reducing their own waste output, Marwan also emphasises how although the Lebanese Ministry of Environment is determined to keep sight of the Sustainable Development Goals through legislation, this is not enough. “The way I see it,” he says, “the importance [of sustainability] is not only in issuing laws and decrees. The problem is how to implement them.”

Supporting on-the-ground initiatives to build capacity to address climate change at a local level is where the UfM’s supported and EU financed project “Clima-Med” comes in. In Lebanon, Marwan emphasised that Clima-Med “actually directed us and highlighted the need to tackle sustainability issues”, ensuring a tangible impact in Batloun Municipality. However, for Marwan, the biggest impact was how Clima-Med helped support his Municipality to bring these measures to life: “We learned from the experts on how to really act and implement these methods … So definitely, Clima-Med had a lot to do with what we [have] achieved [in Batloun].”

Over in Palestine, Samar Qawasmi has seen the direct impact of climate change on her city, Al-Ram. As an architect and Manager of the Planning and Project Department, she has earned a unique perspective of the challenges posed by the climate crisis. Having returned to Palestine at the age of nine, she studied architectural engineering and has dedicated her career to helping her community develop sustainably. 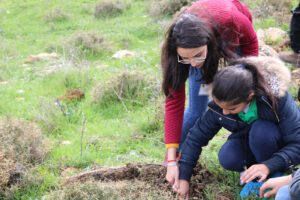 Most impressively, having graduated at a time where employment was hard to find, Samar still managed to “make a place for herself” in a sector that is traditionally male-dominated. Blazing her own way as an architect and engineer, Samar’s career has included consultancy, entrepreneurship and finally working for Al-Ram Municipality, against a background where the female unemployment rate in Palestine stood at 42.8% against 22.3% for men. Having been interested in sustainable infrastructure since her student days, it has been during her time in the Municipal Planning Department that she has really begun to work directly on tackling climate change issues.

Contemplating when she first became aware of the negative impact of climate change, Samar uses the example of the damage done to Palestine’s famous olive trees by the extreme weather conditions caused by pollution. Furthermore, she emphasises the unique challenges faced by Palestine in implementing more environmentally-friendly policies, particularly in regards to collecting accurate data to take informed decisions.

For Samar, the involvement of Clima-Med helps to ensure that the region continues “to make climate change projects a priority.” For Al-Ram Municipality, Clima-Med’s involvement has trained the team to enable better informed data collection and decision making processes. For Samar, her team “needed [the experience of Clima-Med] to see the problem with a wider vision… and make [direct] changes.”

Clima-Med has also provided support for much-needed local awareness raising on the importance of taking action to combat climate change. This has been especially effective in Al-Ram, where the Clima-Med supported awareness raising programme and tree-planting initiatives begins with elementary school children, “teaching them how it is important to take care of the environment.”

Building the future: a bottom-up approach

For his part, Adnane El Ghazi feels more positively about Morocco’s green future. Despite environmental degradation costing equivalent to 3.5% of Moroccan GDP, he emphasises how Moroccan investments in green and sustainable infrastructure have begun to pay off. “Thanks to policies linked to climate change, renewable energies, efficiency and the reduction of emissions by 2030… Morocco today is a leader across Africa.”

Adnane has spent his life driving forward environmentally friendly policies and infrastructures in his role as Head of the Planning and Sustainable Development Department in Oujda Municipality. A passionate advocate of combining official and grassroots initiatives to combat climate change, his professional experiences in the not-for-profit sector inspired Adnane to set up a new Municipal department specifically dedicated to environmental issues. This has allowed him to truly localise national strategic plans, with accompanying tangible successes on the ground in Oujda.

In Morocco, Adnane recalls the great drought of the early 1980s, and how this climate crisis in turn led to mass migration with exacerbated pollution in Morocco’s cities. To tackle the negative effects of climate change, he advocates for the involvement of all levels of society, including the government, the private sector and individual citizens in order to achieve a holistic approach to combat climate change. More specifically, in his hometown of Oujda, Adnane has seen the power of “simple eco-gestures [that] every citizen can do […] And if we multiply this type of act, it has an impact on the overall action.”

Most recently, Clima-Med has enabled the team in Morocco to learn about projects in other Mediterranean cities and make plans to replicate them in their Municipality. This is, in fact, a key component of Clima-Med and many of the projects the UfM supports, as the cumulative effect of each country sharing their successes and lessons learned when tackling environmental issues is even greater, be it at the local, national or regional level.

In all the countries where Clima-Med is present, including Algeria, Egypt, Israel, Jordan, Lebanon, Morocco, Palestine and Tunisia, critical resources have been directed towards combating the COVID-19 pandemic. However, the countries’ commitment to tackling climate change remains unaffected, and the Clima-Med project is continuing to support each region with their environmental strategic planning and project implementation.

Clima-Med has increased flexibility and adapted to continue working no matter the circumstances, notably through online dialogues and other support tools. Its team is especially determined to maintain its full commitment to its cities, ensuring capacity building to prepare Sustainable Energy and Climate Action Plans (SEACAPs) and facilitate funding of their climate mitigation and adaptation projects.

In Palestine, Samar especially highlighted that “[despite] the critical situation around the world, Clima-Med makes it easy for the municipality representatives [to work with them].”

From Adnane’s perspective in Morocco, the impact of the COVID-19 quarantine is that “everyone is being made responsible for these acts to truly become eco citizens, with eco gestures for the environment and for the climate.” Samar agrees – for her, “it is easier, now after corona, to complete the work as it should be.” Chiming in, Marwan is resolute in his message that for Lebanon, collaboration is the only way forward: “[the pandemic] will slow us down. It’s slowed the whole world down, but I have a strong belief that we can make it, together, united, we can make it.”

Identified as a climate change hotspot region by the Intergovernmental Panel on Climate Change, the numerous effects of climate change – including increasing water scarcity, rising temperatures and growing rates of desertification – are felt across borders in the Southern Mediterranean region. The increasing frequency of climate change impacts affects both socio-economic development and the geopolitical environment. The multi-dimensional nature of climate change calls for a coherent and coordinated multi-sectoral response.

The overall objective of Clima-Med is to enhance energy security and adaptive capacity of partner countries while fostering their transition to low carbon and climate-resilient economies, thereby contributing to more stable, efficient, competitive and climate-resilient socioeconomic contexts.