The Union for the Mediterranean (UfM) and the European Centre for Medium-Range Weather Forecasts (ECMWF) signed a partnership agreement in Barcelona, to support all UfM countries to access the critical data they need to tackle Mediterranean climate change challenges.

25 October 2021, Barcelona. Over the next few years, ECMWF, as entrusted entity to implement the Copernicus Atmosphere Monitoring Service (CAMS) and the Copernicus Climate Change Service (C3S) and Union of Mediterranean will work closer and undertake joint initiatives to develop targeted training sessions and materials for knowledge transfer and capacity building in the region. They will also develop a joint free and open data dashboard with easy-to-use indicators and information for the UfM countries to maximise the uptake of climate and atmosphere monitoring data products from Copernicus in all relevant regional initiatives.

The EU’s Copernicus Climate Change Service recently announced that Europe had witnessed its hottest summer on record in 2021. Wildfires raged in many countries along the Mediterranean coastline, while several countries experienced their worst flooding in decades. Meanwhile, the recent publication by the network of Euro-Mediterranean scientists MedECC, supported by the UfM, showed that the Mediterranean basin is warming up 20% faster than the global average and that the region is one of the main climate change hotspots in the world.

A wealth of scientific literature exists on the Mediterranean, and detailed risk assessments and data can be found, yet resources are unevenly distributed and some of the most vulnerable regions’ public and private decision-makers have inadequate access to trusted and up-to-date research. The UfM and the ECMWF, which has one of the largest supercomputer facilities and meteorological data archives in the world, signed this agreement to tackle the urgent need to collate the most advanced environmental knowledge in the Mediterranean basin and make it readily accessible to policymakers, experts and citizens, thus contributing to effectively tackling climate change in the region.

UfM Secretary General, Nasser Kamel, said: “The Mediterranean has been called a hotspot of climate change and biodiversity loss over and over again. The subsequent question is how we can improve the ways in which scientific evidence is constructed, integrated and communicated, so it can contribute more effectively, efficiently and quickly into policy formulation. The Science-Society-Politics interface allows hard-won evidence to turn into concrete policies for our region. This is why the UfM, and ECMWF collaboration will allow our region to be a pioneer in good practices and an example in formulating regional policies in the fight against climate change.”

The ECMWF Director General, Florence Rabier, said: “ECMWF is delighted to have signed this new collaboration with the Union for the Mediterranean. Through our activities within the EU-funded Copernicus Climate Change and Atmospheric Monitoring Services, we aim to support the Mediterranean countries with comprehensive and policy critical data. Our goal is to enable climate adaptation and mitigation initiatives at the European level and beyond in order to tackle the pressing challenges of climate change. By leveraging existing infrastructures and knowledge with the involvement of national service providers and unions like the UfM, we can foster the best environment to move forward in creating sustainable climate practices. “
To inaugurate this partnership, the Union for the Mediterranean and Copernicus hosted a virtual consultation to present the challenges linked to climate change in the Mediterranean, and how these can be overcome by better leveraging climate data. An interactive session took place to gather information about how climate data is currently used in the region, and what further datasets or tools are needed to help policymakers and civil society plan for current and future climate change in the Mediterranean Basin. 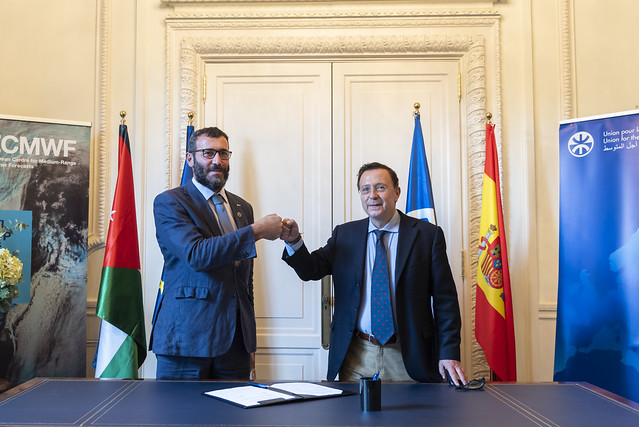