UfM project to foster youth employability: a key shared priority for the future of the Mediterranean

Barcelona, 21 April 2016. Youth unemployment rates in the Mediterranean region are among the highest in the world: 25% on average, which is double the worldwide average[1]. This crucial issue affects countries on both the southern and the northern shores of the Mediterranean. In fact, the European average is 23%, but a higher rate can be seen in southern European countries: over 50% in Greece and Spain, over 40% in Croatia and Italy and over 30% in Portugal. In the Maghreb and the Mashreq, youth unemployment is three times higher than it is for adults, with one out of three young people being classed as a “poor worker” and university qualifications offering less and less guarantees in obtaining future employment.

Currently, almost 60% of the population in the Mediterranean region are under the age of 30.  By 2020, the number of young people under the age of 15 is forecasted to increase to over 18%. This represents an asset for the region, and therefore, a positive and action-oriented regional agenda on youth employability is indispensable to unleash the region’s human and economic potential capital and to contribute to stability and integration in the region.

The MedNC Network: A key solution to enhance youth employability in the Mediterranean

The UfM-labelled project New Chance Mediterranean (MedNC) is a regional cooperation programme aimed at consolidating a network of centres boosting the employability of young people who have dropped out of school before obtaining a degree and unemployed graduates from the Euro-Mediterranean region, with a particular focus on women, through the provision of an innovative training programme inspired by the Second Chance Schools (E2C) teaching model.

The project, promoted by the Office of Economic Cooperation for Mediterranean and Middle East (OCEMO) with the support of the Second Chance School of Marseille (E2C-Marseille), the French Development Agency (AFD) and the Provence-Alpes-Côte d’Azur region, is part of the Mediterranean Initiative for Jobs (Med4Jobs) led by the UfM Secretariat.

For almost two decades , approximately 50 Second-Chance Schools (E2C) spread over 100 sites in France have been offering comprehensive support (in the form of reinforcement of soft skills, internship experiences in partner companies in alternation to the training and aid in social aspects) to improve the social and professional inclusion of young, unqualified school-leavers. In 2015 15,000 young people benefited from this scheme with inclusion rates of between 50% and 60%.

In Spain where the drop-out rate in schools is almost 50%, local centres have developed actions specifically designed towards uneducated young people aged between 14 and 24 who are uneducated, with no qualifications and no job. Some of these schools have joined efforts to constitute a national network, Escuelas de Segunda Oportunidad (E2O).

In the Southern Mediterranean, public and private actors and the civil society are also very active. In Morocco, the OCP Foundation has launched a “Social Actions and Youth Support” programme that benefited thousands of young people in 2015. In Algeria, the Danone and Cevital corporations, partnered with the Algerian Chamber of Commerce and Industry, set up the School Miftah Ennajah, a sales school for jobless and unqualified young people. In Tunisia, the New Chance Association is offering training to graduates from three Institutes -ISCAE, ISG and ISET; the first two are linked to the Universities of La Manouba and of Tunis respectively, and the third to the General Directorate of Technical Education.

Employability in the Mediterranean Conference: our young people speak out. 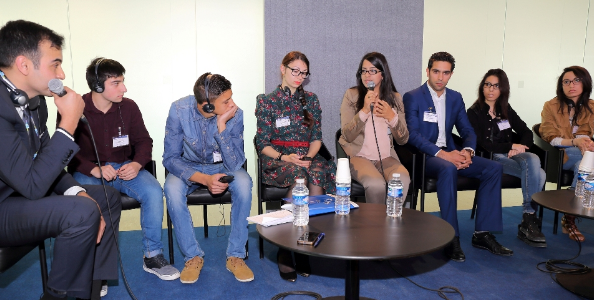 Following previous steering committees held in Casablanca, Tunis, Barcelona and Rabat, the partners of the MedNC Network gathered in Marseille on the occasion of the Employability in the Mediterranean Conference.

The objectives of this event were to give a voice to young people and to demonstrate through several effective examples from the Euro-Mediterranean region, that multiple solutions in favour of youth employability are being implemented.

The meeting was jointly organised by OCEMO, the E2C-Marseille, AFD, and the Provence-Alpes-Côte d’Azur region, with the support of the UfM Secretariat at the Villa Meditérranée.