UfM Secretary General attends the European Parliament to discuss the region’s pressing challenges and UfM actions to foster human development, stability and integration in the Mediterranean

Brussels, 18 April 2016. The Secretary General of the Union for the Mediterranean (UfM), Fathallah Sijilmassi, gave a comprehensive presentation about the activities and projects promoted by the UfM in 2015 together with an overview of its work programme for the current year. Mr Sijilmassi presented the 41 projects labelled by the UfM Member States in the priority areas of youth employability, inclusive growth, women’s empowerment and sustainable development, highlighting the growing number of beneficiaries and the positive impact that these can have in the Euro-Mediterranean region.

“More than ever the magnitude of the regional challenges linked to unemployment, uncontrolled migration and violent extremism call for collective answers and a strengthened regional framework,” said Mr Sijilmassi.

He reiterated the full engagement of the UfM to keep promoting the three key interrelated priorities in the region, namely human development, stability and integration, through socio-economic development initiatives and concrete projects in order to tackle the root causes of the region’s pressing challenges.

Secretary General Sijilmassi explained the UfM’s approach, based on the dynamic interrelation of the political dimension with the holding of Ministerial Meetings that pave the way for the establishment of regional platforms, where high-level representatives and experts follow up on the political objectives so that they can be translated into the implementation of concrete projects on the ground. 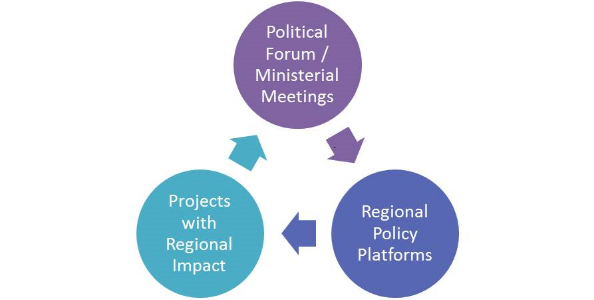 Members of the European Parliament welcomed the regular exchange of views with the Secretary General and confirmed the importance of this regional institutional framework to deal with the region’s challenges. The parliamentarians encouraged the UfM to pursue its efforts to guarantee the financial means required to promote further development cooperation projects for the wellbeing of the region and its citizens. Additionally, some members of the Committee on Foreign Affairs strongly suggested that a dedicated financial mechanism could be envisaged.

The UfM Secretary General reasserted his intention to work in close cooperation with the members of the European Parliament, including the Committee on Foreign Affairs, the Parliamentary Assembly of the UfM, as well as members from other sectorial delegations. In this respect, Mr Sijilmassi invited members of the European Parliament to visit the Secretariat, as some delegations have already done. “Mobilising all political, institutional and financial forces is of utmost importance to consolidate and accelerate the dynamics of regional cooperation in the Mediterranean, so that we can collectively, efficiently and on a long-term basis deal with the current complex challenges and provide regional solutions,” he remarked.

Furthermore, and as the objectives of the UfM are directly linked to the implementation of regional cooperation projects, the Secretary General invited the members of the European Parliament to participate in the launch of UfM projects. In this regard, the next project to be launched will be the “Protection of the Lake Bizerte against Pollution”, a UfM flagship project that will have a positive impact on the socio-economic life of the 500,000 inhabitants of this important region of Tunisia and will contribute to the sustainable protection of the Mediterranean Sea.