Ever since 2006 and the first Euro-Mediterranean Ministerial Conference in Istanbul on “Strengthening the Role of Women in Society”, I have admired the empetus of countries that gradually turned concern over the fair participation of women in their economy into a central theme, to the point where today it is one of the priority areas for the Union for the Mediterranean.

This powerful upswing illustrates the growing awareness of the situation, which should, however, be obvious to all: we can’t make a country advance by disregarding half of its population.

The cost of gender-bias is known and has even been quantified: while the rate of women’s participation in the paid economy has been stagnating at around 50% since the 1990s and legal discrimination against women continues in 155 countries, reducing inequality would lead to a global GDP increase of several billion dollars.

Gender equality is, as everyone recognizes, a key factor in schemes to overcome crises and to stabilise States weakened by conflict.

More fundamentally, as the President of the Republic, Emmanuel Macron reminded during the United Nations General Assembly in September, “it is a profound fight for civilisation, it is our fight, these are our values and they are not relative, they are eminently universal on all continents, at all latitudes”. The persistence of gender inequality in the workplace is an immense waste of talent. So what are we waiting for before giving women a place in the economy and promoting female leadership as a driver of change?

[ufm_quote]”The cost of gender-bias is known and has even been quantified: while the rate of women’s participation in the paid economy has been stagnating at around 50% since the 1990s and legal discrimination against women continues in 155 countries, reducing inequality would lead to a global GDP increase of several billion dollars.”[/ufm_quote]

During my career on the five continents, as a diplomat, as director of the ENA (École Nationale d’Administration), then as a minister, I have often had the opportunity to ask myself about female leadership. The more we rise within the hierarchy of an organisation, the more we are called upon to recruit and promote collaborators, both male and female, and the more we perceive that the intrinsic qualities of female managers are not so much “feminine” qualities, with all the prejudice and clichés they include, but rather qualities relating to a sense of innovation. If women, as such, do not have specific qualities, they do have the particularity of still being in a minority, of being the newcomers to a number of professions or responsibilities, and they therefore question what they find, they offer a capacity for surprise, which is often a capacity to make progress. It is this that makes women vectors of change.

By working to promote women empowerment, the UfM plays a fundamental role that resonates deeply with its purpose: to come together from all parts of the Mediterranean without exception, to unleash energy, and to work together to make progress on concrete projects. I want to commend the action taken in this domain by Secretary General Fathallah Sijilmassi as well as by Delphine Borione, who just left Barcelona, allowing for the labelling of projects such as “Women for the Future in the Mediterranean”, which aims to build a network of women leaders, and “Skills for Success” for underprivileged and unemployed women. It is my deep conviction that it is these concrete approaches at the grassroots level that develop skills, encourage the dissemination of good practices and little by little, ennable things to change.

Advancing women’s position in the economy is not a whim of countries that don’t have other, more urgent problems to resolve. It is also not a domain that just anyone can boast about.

In France, the President of the Republic has made gender equality a “Great National Cause” for the duration of his five-year term. This may have surprised some, since so many advances have been made in terms of equality, but certainly not those who follow these subjects closely and less still those who take a close interest in Europe and see that we are not ahead. It is this lucid view that led the Prime Minister to launch a huge operation on 4th October entitled the “Tour de France for Equality” to advance equal rights but also to ensure equality in actions. I will be participating in this alongside Secretary of State Marlène Schiappa, who is leading this Tour de France, just as I will be participating in the Conference organised by the UfM in Cairo in November.

It is a daily battle that we wage, a battle that wields no weapons and offers no medals, but does have its heroines. All of these women who, day after day, push back the limits imposed upon them to take up their rightful position in the development of their countries and to deeply transform them. I am proud that we are standing by their side. 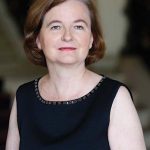