The UfM Secretariat (UfM) continues to support the regional agenda on women’s empowerment and gender equality with the implementation of specific projects and initiatives. Within the last weeks, and thanks to the support of the UfMS’s partners, major progress has been made in the implementation of the following UfMS regional labelled projects:

The second phase of Young Women as Job Creators has already begun. It is funded by the Norwegian Ministry of Foreign Affairs and the Government of the Principality of Monaco and is to be implemented in 2015-2016 in Albania, Egypt, Jordan, Morocco, Palestine, Spain and Tunisia.

After the success of Phase I, in which some 800 women from 32 participating universities benefited from the project in Jordan, Morocco, Palestine and Spain, Phase II aims to reach around 2,000 young women.

In Palestine, Women’s Entrepreneurship Day (WED), which is the project’s core event, took place on April 11th in the Palestine Red Crescent Hall and was attended by around 100 young women. The workshop provided the participants with advice on how to write an initial business plan and a valuable opportunity to work with local role models and business development trainers in an effort to increase their motivation and develop their initial business ideas and plans, including key financial aspects. The young women will now receive training in marketing, finance and management together with a mentoring programme. After Palestine the project is to be rolled out in Albania and Morocco, with 2 WEDs scheduled for the near future in Albania and 41 WEDs to be hosted in Morocco in a number of universities around the country during the coming months.

180 young women have already benefited from the 4-month training programme carried out in Jordan and Morocco. The programme has been very much appreciated by these young women who are now looking for work with the support of AMIDEAST, the promoter of the project. 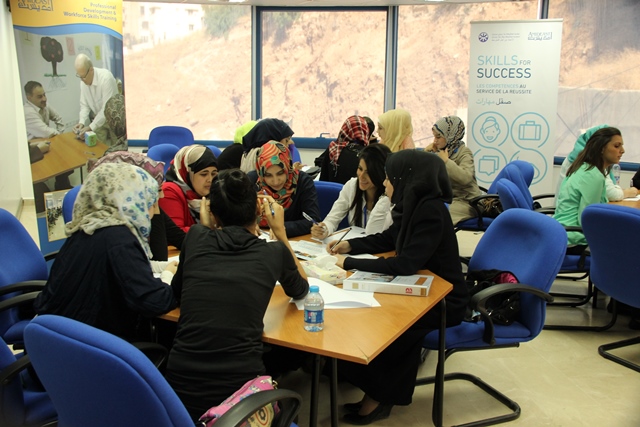 “I can apply the skills I am learning to my everyday life,” commented Dana Alazzi, one of the project’s beneficiaries in Jordan. “In addition to the professional skills I’ve learned, I’ve improved my spoken English which makes me feel I can contribute to making a positive difference in our world. This is a wonderful programme that has expanded my potential and given me more opportunities.” Leila Rajouh, from Morocco, was equally enthusiastic: “Skills for Success gives me, as a young woman, the chance to improve my skills in life, to be more confident, and to better understand myself and other people.”

The regional programme is currently being implemented in Lebanon and the training courses, which started in May and will last until September, are to take place in Beirut, Tripoli, Tyre and Zahlé.

The project started up in April 2015 in the 3 countries where it is going to be implemented: Morocco, Egypt and Tunisia. In close coordination with the national authorities in charge of education in each country, the project will draw up a new curriculum including civic concepts, systems, processes in civic life, gender equality, education for human rights and inclusive and sustainable development that will improve basic citizenship and equality skills. It will train teachers in citizenship education with new materials and methods and provide practical training in gender equality and conflict management and resolution. The project will also enhance the participation of students and families in school organisation.

Over 90 teachers and 3,000 students from secondary schools will be targeted by the project’s activities.

The project was presented in Casablanca, Morocco, on April 24th. Around 40 people attended the event, including policymakers, teachers, students and civil society and media representatives.

The first meeting of the directorate of the Foundation, made up of the European Institute of the Mediterranean (IEMed) from Spain, Forum Femmes Méditerranée from France, Réseau Universitaire et Scientifique Euro-Méditerranéen sur le Genre et les Femmes (RUSEMEG) from Morocco, Fédération de la Ligue Démocratique des Droits des Femmes from Morocco, the Center of Arab Women for Training and Research (CAWTAR) from Tunisia and the French Government, was held in Barcelona in December 2014 to agree on the action plan for implementing the project.

The internet platform that will interconnect the three major strands of the project will be presented and launched shortly.