Online, 4 November 2021. Following the first two first editions of the UfM Social Economy Workshop held in 2019 and 2020 successively, and acting upon its mandate in promoting human and sustainable development, the UfM Secretariat joins hands again with the Spanish Social Economy Employers’ Confederation (CEPES) and the German Development Cooperation (GIZ/BMZ), to co-organize the third edition of this Workshop, this time focused on a new social economy agenda for a sustainable and inclusive Mediterranean.

This comes at a time when the European Commission is envisaged to adopt a European Action Plan for Social Economy at the end of 2021, contributing to establishing a new work agenda that promotes the Social Economy as a key driver for a sustainable recovery and fair transition in the northern and southern Mediterranean that would stimulate inclusive economic growth and the creation of decent work.

The proposed objectives for this Workshop are:

These objective are further anchored to the key recommendations emanating from the first two editions of the UfM Social Economy Workshop. The Ministerial Declaration of the 4th UfM Ministerial Conference on Employment and Labour (2-3 April 2019, Cascais – Portugal) reiterated the commitment of the UfM Member State governments to the social economy, as it is stated in the final declaration. 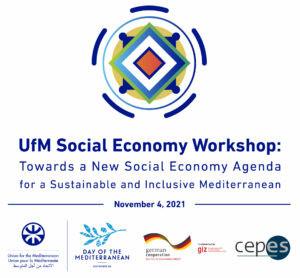