Barcelona, 8 March 2019. The Union for the Mediterranean (UfM) embraces the celebration of the International Women’s Day with the implementation of projects and initiatives in the framework of a common Euro-Mediterraenan agenda on women’s empowerment.

UfM Member States experts recently took stock of the progress made to promote gender equality in all spheres of society a year after the adoption of an ambitious Ministerial declaration (Cairo, 2017). The UfM Secretariat is currently working together with country respresentatives, experts from international organisations, NGOs, civil society organisations and other concerned actors on the development of a regional follow-up mechanism with indicators that will allow to accurately assess and monitor the progress made on women’s rights, evaluate gender gaps and provide recommendations to policymakers and stakeholders in order to increase the impact of national policies and initiatives.

This comprehensive and regional approach should include addressing factors deemed conducive to radicalisation and violent extremism, as opposed to security strategies alone. The decisive and vital contribution of women to peace and security has become internationally recognised.  It is in this perspective that the UfM Secretariat launched a regional research study on “the Role of Youth and Women in Preventing Violent Extremism”. The study will be released next month  complementing the work carried out in the framework of the project “Enhancing the civic and social engagement of women and youth in preventing violence and extremism”, endorsed unanimously by all UfM countries and implemented by the British Council.

The project aims at supporting, on one hand the active involvement of young women and men in their local communities, in particular by building their capacity to engage in preventing violence and extremism, and on the other hand, the establishment of local, national and regional dialogue platforms, the exchange of best practices and the organisation of networking activities for women and youth organizations. The 4-year project will involve Tunisia and Morocco in a first phase, with potential expansion to other countries. More than 20,000 community members will benefit from the project’s activities.

“The Secretariat of the Union for the Mediterranean is fully engaged in the implementation of a shared agenda for women’s empowerment in the region, by promoting a structured regional dialogue and supporting projects aimed at advancing equality between women and men, which remains a fundamental right.” said Laurence Païs, UfM Deputy Secretary General for Civil and Social Affairs.

In accordance with the Roadmap for Action endorsed by the UfM Foreign Affairs Ministers  and in line with the 2030 Agenda for Sustainable Development, the UfM emphasises and supports the instrumental role of women and their decisive contribution to human development, inclusive societies, prosperity and stability in the Mediterranean region. The UfM implements this contribution at a number of levels:

After visiting the UfM headquarters, six incredible women who are paving the way for equality spoke at the Institut Français of Barcelona: 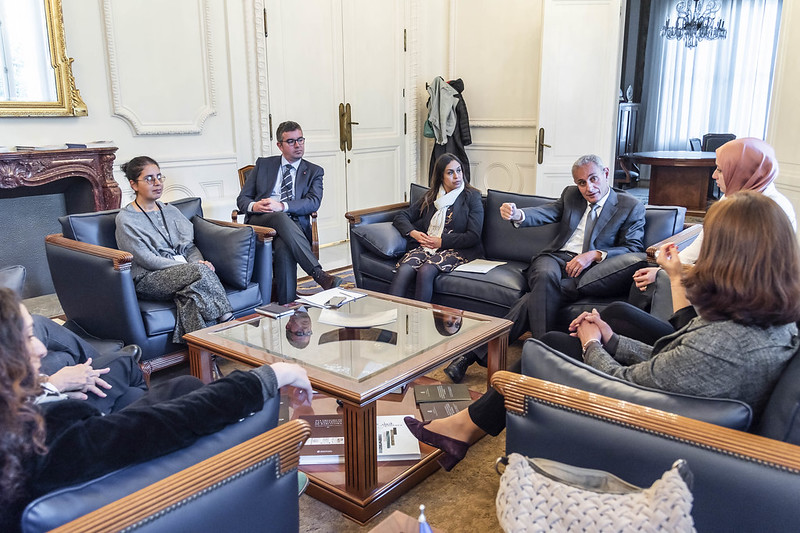