HOMERe project promotes internship mobility between Mediterranean countries, and is predominantly aimed at high-profile students in their last year of study before graduation. The objective is to ease their transition from the academic environment to qualified entry-level roles in their own country – in a region where youth unemployment often increases with the level of education.

High Opportunity for Mediterranean Executive Recruitment (HOMERe) improves the cross-cutting skills and increases the employability of Mediterranean high-profile students currently in their last year of study before graduation. The project aims to tackle youth unemployment and underemployment and help those taking part in the project to secure a graduate position that is relevant to their qualifications and is in their own country. 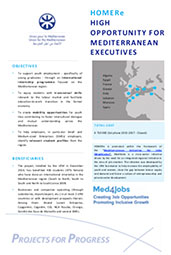 HOMERe uses internship mobility as a tool to combat the skills gap that has been identified as one of the region’s main obstacles when it comes to hiring young people.  Despite their solid academic backgrounds, graduates often do not have the soft skills that potential employers are looking for, such as teamwork, problem-solving, leadership, etc. According to World Bank data, 40 per cent of employers in the formal private sector in the Middle East and North Africa point out the skills gap as a major hindrance to business operations and stable growth. HOMERe internships last, on average, for six months and are intended to be structured with pre-determined tasks and responsibilities.

Through its extended network of high-level academic institutions on both sides of the Mediterranean (engineering and management schools as well as universities), HOMERe aims to attract transnational private companies that operate in the Mediterranean region and are searching for brilliant colleagues. The programme provides help in the identification, preparation and mentoring of appropriately qualified students, while the host companies commit to allocating a tutor to their interns and to pay them a nominal monthly allowance.

But by far the most innovative aspect of the project is that participating companies must consider employment opportunities in the intern’s country of origin after the successful completion of the internship (local branch, subsidiary, provider, etc.).

The project consortium includes a mix of academic and economic organisations.

Project implementation is actively supported by national HOMERe bodies and in close relation with employers’ federations.