The Jordanian Railway Network project will expand the Jordanian railway system, and ultimately connect it with the rest of the Mediterranean region.

Closer integration of transport systems will make connections faster, cheaper and more efficient, benefitting citizens and businesses across the Mediterranean. The main rail line being created by the Jordanian Railway Network project is a 509 km North-South corridor across the country, starting at the Syrian Border and ending at the Port of Aqaba. The line will connect the country’s capital Amman, the surrounding logistics centres, and the nation’s port of Aqaba.

Links to neighbouring countries are foreseen for later stages, with connections to Turkey and Europe, on the one hand, and to Gulf Cooperation Council countries, on the other.

In the first phase, the North-South corridor includes a rail link between Aqaba Port and the country’s largest phosphate mine of Shidiya. Once finished, phosphate will be transferred directly from the Shidiya mine to the proposed Wadi Yutum station and then on to the new South Terminal of the Port of Aqaba.

In the second phase, construction of the rail section between the new South Terminal of Aqaba Port up to the border with Syria will be completed. The project’s outcome will enable increased mobility of the population, facilitate international freight flows, and boost business opportunities. 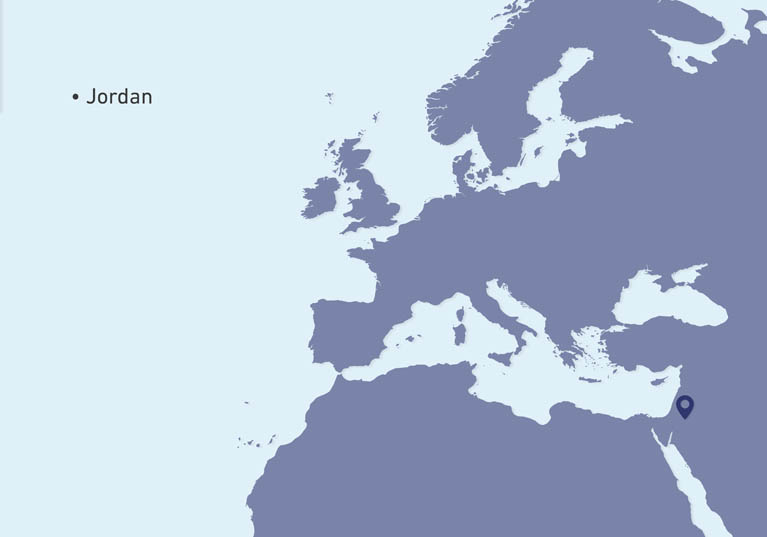 Approximately €336 million financed by the Government of Jordan for the acquisition of the land needed for the construction.

The Jordanian Railway Network project is promoted by the Ministry of Transport of Jordan.

Development of the project roadmap in collaboration with the Jordanian government and validation by the Jordanian Ministry of Transport.

Development of complementary studies on railway operational models, as well as an interoperability study aimed at evaluating the best standards for the Jordanian Railway Network to adopt.

Submission of the studies’ results to the Ministry of Transport and definition of the operational phase.

Construction works for the rail link between Aqaba Port and the country’s largest phosphate mine of Shidiya, and for the main North-South rail line connecting Amman, the surrounding logistics centres and the new South Terminal of Aqaba Port.

Improved safety due to decreased accidents connected to freight transport in the region.

Development of passenger railways in the region.