UfM meeting of international experts on women’s empowerment: still much work to be done in the region

Barcelona, 27 April 2016. The objective of the UfM regional dialogue process is to review the progress achieved in the implementation of the UfM ministerial commitments (see the 2013 UfM Ministerial Declaration on Strengthening the Role of Women in Society – Paris) and prepare for the next Ministerial meeting, pushing forward a regional agenda on gender equality and women’s empowerment through the exchange of information, experiences, best practices and operational initiatives.

“This regional dialogue will not only monitor stakeholders’ commitments with regards to women’s rights and participation in economic, political and social life, but it will also explore how to best recognise and promote the role of women as drivers for human development and stability in the region,” said Delphine Borione, UfM Deputy Secretary General for Social Affairs. “Giving equal rights and opportunities to women and men leads to more stable, prosperous and inclusive societies. UfM members are strongly engaged in this endeavour, which contributes to addressing the region’s many challenges more efficiently.”

The Mediterranean context has dramatically changed since the latest Ministerial meeting. In addition to the economic crisis and the high unemployment rate, the region is facing pressing and serious challenges linked to terrorism, extremism and the tragedy of the refugee crisis and illegal migration. Women and children are the primary and biggest victims. Participants pointed out that the Regional Dialogue should ensure that the specific needs of women migrants and refugees are addressed and that the role of women as agents for social change, peace and stability is fully recognised and developed.

Four working groups are currently working on four areas identified as priorities to be covered by the Ministerial Declaration: 1) Women´s participation in economic life; 2) Women’s access to leadership and decision-making positions; 3) Combating violence against women and gender-based violence; and 4) Dispelling stereotypes through education and culture. In each topic, participants assess the current situation in the region and provide specific and relevant recommendations. They also share information on national and regional best practices.

The working groups are moderated by a two-person team consisting of a UfM country and an international organisation (Italy and UNIDO on economic issues; France and the OECD on leadership; Egypt and UN Women on the fight against violence; and Morocco on stereotypes).

The four groups will present their conclusions and results to the Ad-hoc UfM Senior Officials Meeting on Strengthening the Role of Women in Society on the margins of the UfM Conference on Women’s Empowerment, set to take place next 5- 7 October 2016 in Barcelona.

Some of the international and Euro-Mediterranean institutions that are part of this multistakeholder platform include UN Women, UNIDO, the OECD, the EBRD, the European Commission, the Anna Lindh Foundation and the League of Arab States. 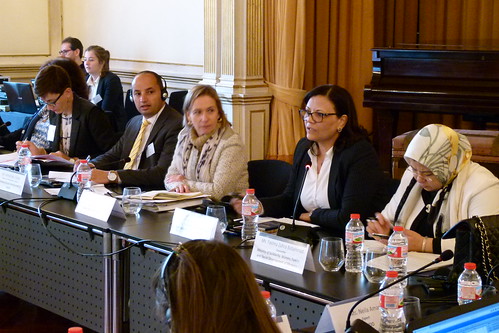 Towards a Renewed Strategic Agenda for Cooperation on Higher Education and Research in the Mediterranean
UfM Member States commit to tackling the employment and employability challenges of the most vulnerable, especially among youth and women
See more