Unleashing the potential of the Mediterranean: the UfM promotes 45 regional cooperation projects in 2016

Barcelona, 30 June, 2016. The Mediterranean is facing challenges on an unprecedented scale that are linked to terrorism, extremism and uncontrolled migration, but also to pressing environmental and socio-economic issues such as climate change and youth unemployment. There is also a largely untapped potential of opportunities ready to be seized in the region. Effective regional integration is more essential than ever in order to ensure a better socio-economic future for the Mediterranean, a necessary condition for stability in the region. 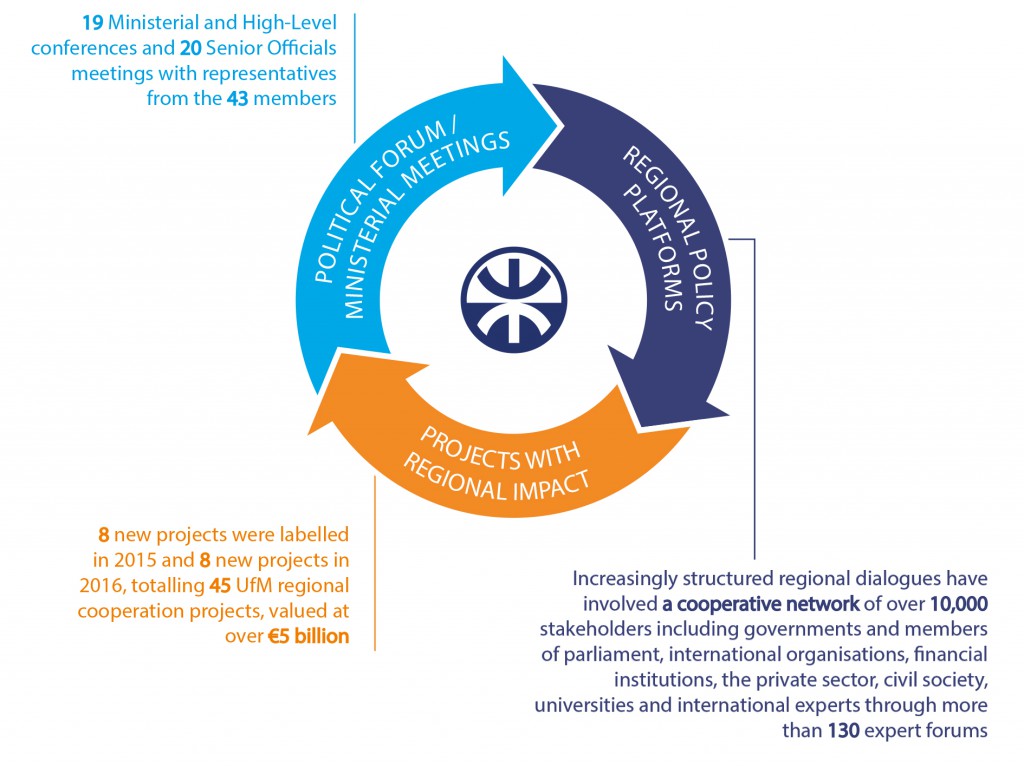 Under the leadership of the UfM Co-Presidency, held by the EU and Jordan, and the active involvement of all Member States, the UfM Secretariat has developed a specific methodology that has yielded tangible results and provided new momentum for regional cooperation efforts. Member States have so far approved 45 cooperation projects representing more than €5 billion in investment for the region. Of those projects, 22 of which are already under implementation, benefitting more than 100,000 citizens in the fields of youth employment and inclusive growth, 50,000 in the field of women’s socio-economic empowerment and supporting the development of close to 1,000 small and medium enterprises in the region.

“I am currently a young entrepreneur in my country. I’ve just set up my own company with the aim of building a private school to provide pre-school, primary, junior and secondary education in a rural area of Morocco”, says Sukeina El Bouj, a young woman beneficiary of the Union for the Mediterranean Initiative for employment (Med4Jobs). She is developing her project after having had the opportunity to undertake an entrepreneurship training programme, which included an internship at the European Investment Bank (EIB).

The UfM has also actively contributed to fostering regional dialogue and cooperation by regularly convening partners and stakeholders, who include more than 10,000 representatives from governments and members of parliament, international organisations, financial institutions, the private sector, civil society, universities and international experts.

“We must reinforce the regional dimension and the collaborative approach of our common cooperation efforts to foster human development and job creation, especially for our youth, our main asset for the future and stability of our region”, said UfM Secretary General Fathallah Sijilmassi at the UfM Ministerial Meeting on Regional Cooperation and Planning, held on 2 June. “The UfM Secretariat is committed to further contribute, through its activities, to tackling the socio-economic root causes of the current security and migration challenges by means of an enhanced common agenda for human development, stability and integration in the Mediterranean. Investing in regional integration is investing in stability and peace”, he added.

The recently signed UfM Ministerial Declaration on Regional Cooperation and Planning; the UfM Ministerial Conference: “Towards a common development agenda for the Mediterranean”, held on 26 November 2015 on the occasion of the 20th anniversary of the Barcelona declaration; the EU Foreign Affairs Council’s conclusions, released on 14 December 2015; and the new European Union Neighbourhood Policy for the period 2014-2020 provide new prospects for the UfM and highlights its role as the central platform for regional cooperation in the Euro-Mediterranean region.